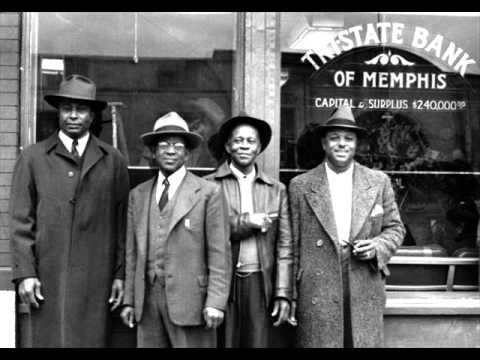 W.C. Handy named several blues for cities of significance in his life: Memphis, where he lived from 1905-17, St. Louis, where he was a penniless, flea-infested hobo in 1893; Atlanta, where he played some career-enhancing concerts in the World War I era. “Beale Street Blues” is his only masterpiece named for a street, the main drag of the black entertainment district in Memphis. The song was composed in 1916, and in 1917 Handy added words based on his experiences on the thoroughfare. One late night he happened into a local barber shop and asked the proprietor why he hadn’t closed for the evening: “well, ain’t nobody got killed yet” was the reply. The beginning of the chorus, though omitted in our day’s recording, sets the scene leading into the “I’d rather be here…” finale:  “And the Blind Man on the Corner, who sings these Beale Street Blues.”  Handy was a great folklorist. His bandmates would ask why he was always lingering on street corners listening to singing beggars. He always had a pencil and a scrap of paper with him, and the foresight to know what should be disseminated rather than lost in the mists of time.

“Beale Street Blues” was Handy’s farewell to a city he loved, where he had written his greatest works. He would soon head to New York’s Tin Pan Alley and the big time. Among the many musicians he befriended in New York was the pride of Harlem, Thomas “Fats” Waller, a great pianist, composer, and comedian. Fats could also swing the pipe organ, a mighty beast. Most of this 1927 recording is his, with the great blues singer Alberta Hunter limited to a brief interjection: “Ah, play that thing, Mr. Waller, Lord.”  Toward record’s end we are blessed with Ms. Hunter’s rendition of the chorus, and though she mysteriously replaces the word “sergeant” with “surgeon,” the substitution works just fine. Hunter was a Memphis native, born in 1897; she absconded for Chicago aged 11, but would have heard Handy’s inescapable bands in Memphis in her childhood. By 1920, now a cabaret diva, she was making a sensation singing Handy’s latest compositions. Hunter vanished from the entertainment scene in midlife, opting for work as a nurse. She returned to show business in old age and was a sensation all over again.