Sam Cooke and the Soul Stirrers: Come, Let Us Go Back to God 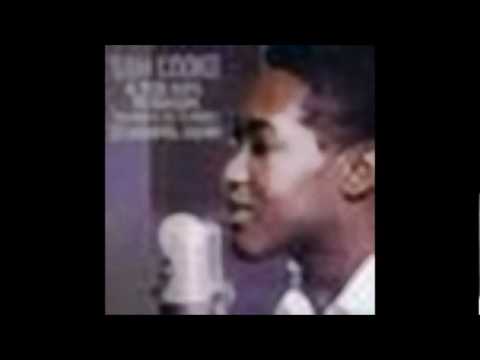 In art, as in life, there are moments that change everything – moments that, in hindsight, divide our histories into “before” or “after.” Whether it’s falling in love or the fall of the Berlin Wall, the moment happens once, and then nothing is the same. Usually, memory shapes our view of things so that they look differently in hindsight than they did in the moment, but once in a great while, a camera or a microphone is rolling, and the moment of transformation is captured.

Picture, if you will, in Los Angeles in 1951, a packed room with no natural light, filled with men on two sides of studio soundproof glass: the Jewish men in the booth on one side working the sound board, and the Black men on the other side, singing around a single microphone. The minor record label, Specialty Records, was holding largely unheralded recording session for an established Gospel group, The Soul Stirrers, to feature their new, 20-year-old lead singer. The lead-in starts, the back-up singers start harmonizing, all pianissimo, all “ooh,” and after fifty-five seconds, Sam Cooke steps up to the microphone and begins to sing. American music would never be the same.

Sam Cooke had a voice and an artistry like no other. His tenor oozes a liquid, golden sweetness that caresses the inner ear, and his effortless style, smooth delivery, and endless, unfathomable elegance are downright sexy. There’s just something about his singing, about the instrument itself, some divine simplicity filled with longing, somehow simultaneously perfectly balanced and also reaching for something unattainable. As a tenor, and a student of the tenor voice and its history, I find Cooke’s voice to be the most beautiful tenor voice ever recorded.

But there’s more to him than that. Cooke composed; was an astute businessman; he founded a record label, as well as a publishing company, both of ground-breaking for a Black artist at that time; and was active in the struggle for civil rights. Both Black and white audiences loved his songs, something unheard of previously. Now, he is called the “inventor of soul music,” by which means: what we think of as Soul music, the Motown sound that inspired the Beatles and Stevie Wonder, which would eventually inspire the birth of Hip Hop and R & B, and influence every kind of modern popular music, would be
unimaginable without the work of Sam Cooke. His were the shoulders upon which Marvin Gaye, Nina Simone, James Brown, Beyonce, or Kanye West stood, and stand. In my opinion, Cooke gets plenty of credit for his performing and recording career, but not nearly enough for the developments he brought into American musical and cultural life.

Cooke did have quite the career, though. Some of his songs, like “(What a) Wonderful World” has become a Hollywood staple of young love, and the jaw-dropping “A Change is Gonna Come,” which Cooke wrote himself, has become an anthem of the American Civil Rights Movements, and remains a touchstone for social justice activism; other hits, like his breakout “You Send Me,” “Chain Gang,” “Bring It On Home to Me,” “Another Saturday Night,” and “Twistin’ the Night Away” survive as near-perfect distillations of soul music at its best: they astonish us aesthetically, while seemingly defying us to keep from moving our hips. His rapturous “Nothing Can Change This Love” was the first dance at my wedding. By the time of his death at age 33 in 1964, he had over thirty Top 40 Hits to his credit. His voice, his compositions, and his songs linger in the ear and in the American imagination.

Yet Cooke lived hard, and there’s no disputing that, at the time of his sudden death, some of the bloom and beauty of his voice had faded, the victim of late nights, bad habits, and a grueling schedule. And then that sudden death: he was shot dead by a hotel manager in Los Angeles, under what can mildly be described as dubious circumstances, once again robbing Americans of a Black icon of the 1960s through violent means.

But let’s rewind. Before the shooting, before the hits and the fame, before all of the events and work that elevate him in popular and musical memory, Sam Cooke was the son of a preacher man (no, really, he was) from Mississippi. And he got his start just as you might expect: in the church. He was performing regularly by age six, and continued on throughout childhood and adolescence, always with Gospel groups. His big break would come before his twentieth birthday.

It was 1950, and the 19-year-old Samuel Cook (the “e” was added later) was hired to replace a prominent member of the gospel group The Soul Stirrers, R. H. Harris, after his retirement. Though confined to Gospel’s niche market, the group was a major force in American music– they’d performed at the White House, recorded Billboard hits, and performed all over the country, making soulful, technically sophisticated music, and developing as tremendous in Black Christian music. They were stars. As such, this job was a big, big break for the soon-to-be superstar, and the recordings from this time prove the point. In 1951, Specialty invited them to lay down some tracks.

And there we are again, in that dark room. Cooke steps up to the microphone. In hindsight it’s easy to see this, but with the entrance of that voice, an era of American music was over: segregation.

And not just Black/white segregation! At the time of this recording, there was a sharp, irreconcilable divide between sacred and secular music in the Black community… a musical artist either “had religion,” or did not, and audiences followed one or the other, according to their own religious leanings. Yet here was a Christian artist who could not confine himself to the Church: his goal was to reach as many people as possible, and he couldn’t do that while restricting himself to Black sacred listeners only. In a few years, he would strike out on his own, singing secular music, but bringing the musical sensibilities he knew from the Church. Here, not for the first time, he was a trail-blazer. The likes of Aretha Franklin, Ray Charles, the Reverend Al Green, and Marvin Gaye (who was born Marvin Gay, and added the extra partially in reverence to Cooke, his hero) would follow suit.

But Cooke would be among the first to disrupt musical segregation by color, too. He appealed to white listeners in a way that no Black artist had before, while retaining his massive appeal among Black audiences. Musical segregation would not be eliminated by 1956 (or by 2016, for that matter), but the practice of classifying music either for the “white” pop charts or the “Black” R&B is now knocked-out, and it was Cooke who landed that first, powerful punch. Furthermore, the racial diversity of their audiences helped spark some artists in the 1960’s to speak out against segregated performance venues: in this way, music and musicians became an essential part of the Civil Rights Movement.

Most of all, though, just listen to that voice. If you’re a fan of singing, and of the history of vocal-musical communication, as I am, listen to the way he spins the lines at his first vocal entrance. Imagine that this artist would create vocal sounds that were unheard of to all but Black sacred music listeners at the time.

Hearing that sound, know that suddenly the sound world of the Ink Spots, Glenn Miller, Tommy Dorsey, and Nat King Cole suddenly became the sound of the past: beautiful, extraordinary even, but no longer cutting-edge. Suddenly, the world of Motown, The Beatles, Marvin Gaye, the Jackson Five, James Brown, and Stevie Wonder became possible, became inevitable. Soul was coming into being. History and culture had turned, all of a sudden– more was possible, the world of sound would get richer, and all of us would have to change.

In anticipation of our final NYFOS After Hours of the season tonight, “Harry, Hoagy, and Harold,” we’ve asked our performers, young talents from the Juilliard School, to curate this week’s Song of the Day. Come out to see them at 10pm tonight, Monday, May 2nd at HENRY’s Restaurant! Today’s entry is from tenor Samuel Levine.