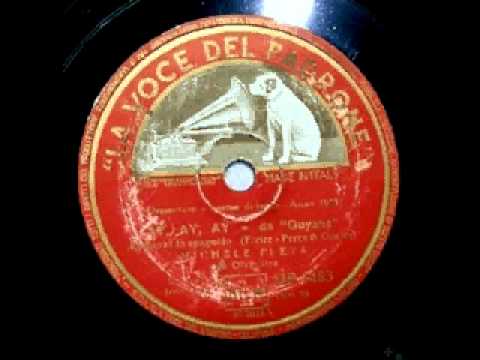 Alex McKissick with the Song of the Day for August 27th:

As the Orient residency tenor soloist, I feel it is my duty to introduce, or for the more well-informed out there, to further explore the life of a fabulous Spanish tenor, Miguel Fleta.

Mr. Fleta was an operatic superstar back in the early 20th century. Singing in almost every major opera house of the day, Mr. Fleta consistently impressed audiences with his vocal faculties. The power of his high notes combined with an inhuman capacity for diminuendos to pianissimo even (or especially) in the heights of his range drew large raucous crowds to his performances. These talents earned him almost as much criticism as praise however. Critics frequently accused Fleta of over employing his diminuendos and of drawing too much attention to his high notes at the expense of the rest of the vocal line. To many, criticism of this kind seems moronic, though, certain recordings do exist where Mr. Fleta does, perhaps, push the boundaries of taste.

The modern audience owes much to Fleta. He created the role of Calaf in Puccini’s Turandot. He was a huge proponent of Zarzuela and Spanish song, recording a large catalogue that kept many works alive to be discovered again today. He almost literally gave his soul for the enjoyment of the crowd. After performances, it was not rare for Mr. Fleta to come out onto the stage of the opera house with his guitar to sing Spanish song and Jota until the crew made him and the audience leave. Then, they would simply walk to the nearest bar, and his performance would continue into the early hours of the morning. Perhaps, it was because of this and early complications from the kidney disease that would take his life, that Mr. Fleta’s voice began to deteriorate by 1930. Miguel Fleta took a teaching position at the Madrid Conservatory in 1936, which he held until his death in 1938.

Here is the song “¡Ay, ay, ay!” by Chilean composer Osman Perez Freire. In this you can hear all of Fleta’s strengths, and maybe even feel that overwhelming passion that he poured into everything he sang.