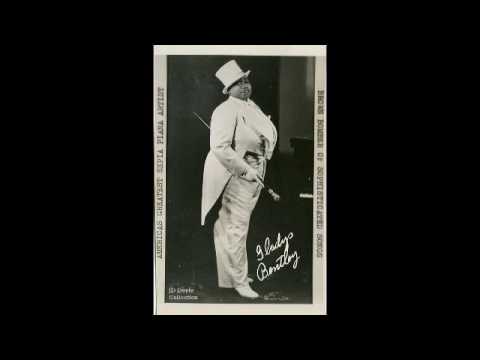 As we prepare for W. C. Handy & the Birth of the Blues with program consultant Elliott Hurwitt, we revisit his first week hosting Song of the Day. This song was originally posted on October 26, 2015.

Gladys Bentley (ca. 1907-1960) was one of the biggest stars of African-American entertainment in the 1920s, along with Florence Mills, Ethel Waters, Josephine Baker among female stars at her level, and her stardom lasted through the 1930s. She was typically seen in a white tuxedo, and never, at least in public, as a woman.  Bentley is generally cited as among the most openly gay major figures of the Harlem Renaissance.  In 1958 she made a memorable appearance on “You Bet Your Life,” and by that point late in her career she was appearing as a woman, and is accompanied by a Nigerian man, who eventually dances to her fine rendition of “Them There Eyes,” joined by host Groucho Marx.

Bentley’s 1928 version of “Worried Blues” is unrelated to other more famous “country blues” songs by that title in the period, and I wouldn’t be surprised if she wrote it. The lyrics are a good example of the complaint-about-a-man genre, with a memorably funny final line.  Here Bentley takes on all three roles, singer, instrumental soloist, and pianist, as on the famous records made by such blues queens as Bessie Smith, who memorably had Louis Armstrong playing cornet obligato fills between Smith’s voice. On “Worried Blues,” Bentley is her own band, scatting spare, bluesy, growled riffs.  While some sources have claimed the pianist is songwriter J.C. Johnson, I suspect the fine keyboard work here is also by Ms. Bentley, who shows in 1958 she would have been more than up to it.