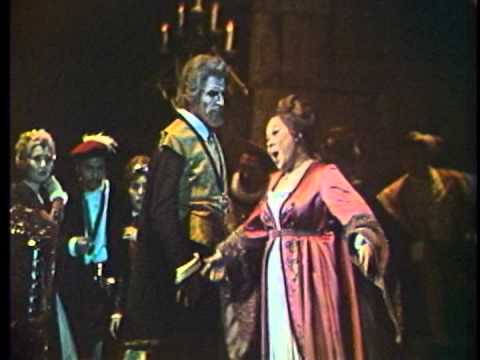 I seem to have spent the week writing about bel canto singing without posting a single aria from the bel canto era. Let’s rectify that with this beauty I found online: the young Renata Scotto singing the Mad Scene from “Lucia di Lammermoor.” It was filmed in Tokyo with what look like the Metropolitan Opera sets and costumes. An Italian conductor, Bruno Bartoletti, led the local forces (NHK Symphony, Tokyo Philharmonic Chorus) in a beautiful performance. Back in 1967, audiences were still happy to see operas in their traditional setting—this was before the modern craze for updating the bread-and-butter rep. We are treated to two plump Italians wearing tartans as they play out Sir Walter Scott’s tragic love story. Scotto and her Edgardo, Carlo Bergonzi, were in a state of grace that night.

As a young woman, Scotto had a voice like a lemon meringue pie, a delicious combination of tartness and sweetness. There was color and a certain amount of punch in the lower octave, and (on a good night) a free, lofting quality as the voice ascended. She had a special gift for musical spacing, and an especially eloquent way with words. No, this was not the Gothic cathedral sound of Maria Callas or the Peggy Fleming virtuosity of Joan Sutherland, but a touching combination of the intensely human and the otherworldly (just listen to that cadenza!). I have been known to tell my students, “In bel canto, Always Be Doing Something.” What I mean is that a constant play of dynamics and a strong sense of musical destination are crucial for the vitality of the phrasing. Of course this can be carried to fussy extremes, but it’s a helpful motto for singers who are just discovering bel canto. They are usually told that this style is all about legato—tying one note firmly to the next, “going from vowel to vowel.” Not untrue, but a sure recipe for being boring and monochromatic if that’s your only directive. Bel canto needs strong declamation, along with the butter-cream fantasy of a cake decorator.