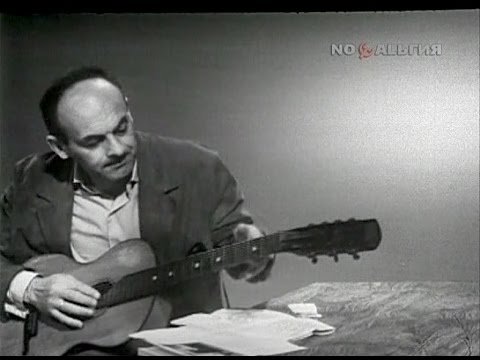 It is with deep love and gratitude I return to NYFOS Song for the Day. As we sit in our homes and think of so  many beloved familiar things with melancholy, my mind turns back to the songs I grew up with in Moscow.

My first selection is written by a famous Russian singer-songwriter, Bulat Okudzhava, who was active from the late 1950s until his death in 1997. He wrote thoughtful, lyrical, often deeply melancholy poems and performed them with guitar accompaniment. The tradition, immensely popular in Russia, is that of the bard; the poetry is delivered over simple chords and a simple melody, and while the music adds the emotional color, the words remain dominant.

My chosen song, “The Last Trolley,” was first performed in a long-forgotten Soviet movie, but the song has endured and remains beloved throughout the generations.

The image it conjures is this: a lonely, hurting person takes the last trolley across a big city, and as the trolley weaves through the streets, he finds consolation in unknown faces.

This song has been running through my head many times recently, as I think of New York and of Moscow.

When I am incapable of overcoming my troubles,
When the desperation is creeping close,
I jump on a blue trolley as it moves,
The last one, late one, the unexpected one.

Last trolley, rush through the streets,
Twist through the boulevards,
In order to pick up everybody
Who has suffered a calamity this night.

Last trolley, open your doors for me,
I know how during the chilly midnight
You passengers, your sailors,
Come to rescue me.

So many times I escaped my troubles with them,
I touched their shoulders,
Just imagine how there is so much kindness
In silence.

Last trolley is swimming through Moscow,
Moscow, like a river, is quieting down,
And pain, that was beating in my temple like a baby starling,
Is quieting down.