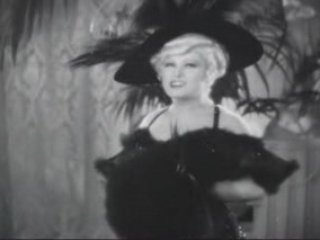 Handy’s first hit, “Memphis Blues,” was self-published as a piano rag, which Handy sold, lock, stock and barrel, to a clever music publisher visiting Memphis on business in 1912. The loss of royalty income due to this transaction haunted Handy for the remainder of his life. The following year saw two pivotal developments in Handy’s career. He founded Pace and Handy Music Publishing Company with the brilliant businessman Harry Pace; and his “Memphis Blues” was issued as a song, with words by George Norton, who had another smash hit with “Melancholy Baby.” Norton’s words extolled Handy and his band, and the song caught on immediately and nationally, making Handy, a successful regional bandleader, famous, somewhat to his surprise, from coast to coast.

In her performance of “Memphis Blues” in “Belle of the Nineties” (1934), Mae West exemplifies the pizzazz of vaudeville. West, one of the biggest stars of early talking pictures, was steeped in the milieu of early 20th-century stage comedy, and she swaggers through “Memphis Blues” with authority. The house band in the film, the Duke Ellington Orchestra, plays along with a bit of hokum involving a drum stick, without losing a beat. Though “Memphis Blues” wasn’t composed until 1912, Handy had come to prominence as a minstrel band cornetist, conductor, and arranger in the 1890s, and the use of this song as a marker of nostalgia is highly successful.

“Memphis Blues” has a happy ending. Handy’s copyright lawyer, Abbe Niles, kept an eye on the date the song would enter the public domain, and Handy gained control of the property in 1940, in time to profit from his first hit toward the end of his life.