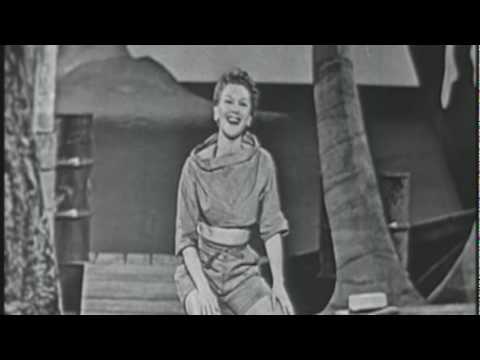 When Mary Martin died in 1990, the headline of her New York Times obituary called her “the first lady of musicals.”  Probably now unknown by anyone younger than 40, Martin was, in her time, one of the most famous performers in the United States, and the creator of two classic Broadway musical roles (Nellie in South Pacific and Maria in The Sound of Music). But her fame was enhanced by her characterization of Peter Pan, in a musical version that she performed on Broadway in 1954, before televising it a number of times. It’s safe to say that nearly every American child of the 1950s and 60s knew that Peter Pan flew, crowed, and was played by an exuberant lady who, like her character, never grew old. Hers was far from the most beautiful or powerful voice on Broadway, she wasn’t a great dancer and was never considered a classic beauty. It was what Martin did with the talents she did possess—her enormous personal charm, warmth and an innate understanding of what made a song tick—that conquered her audiences.

Martin’s greatest stage success was in Rodgers and Hammerstein’s 1949 hit, South Pacific. Until recently, the only evidence of that performance was the very fine original cast recording.  But in 1952, when Martin repeated the role in London, someone had the foresight to film that production’s final dress rehearsal, and that film has recently come to light. Her Broadway co-star, Ezio Pinza, had long ago left the show (replaced in London by Wilbur Evans), and the surviving film is blurry, with a limited number of close-ups. But it captures not only one of the most celebrated productions in Broadway history, but a legendary performance by its female lead. “A Wonderful Guy”—which begins at 3:43 of this clip—was one of the show’s great hits. By the time of this film, Martin had played the role for more than two years on Broadway, supposedly missing only three performances.  But her greatest talent was spontaneity, her ability to recreate every moment as though she were making it up as she went along.  The staging of this number is almost startling in its simplicity—Martin just sits downstage and confides her character’s feelings to the audience. The dance that follows is a bit embarrassing—South Pacific was one of the few big musical hits not to have a credited choreographer, and what little dance the show did have was worked out by director Joshua Logan. But as Elia Kazan, who directed Martin in her first starring role on Broadway, wrote, “She was full of the love of being loved.”