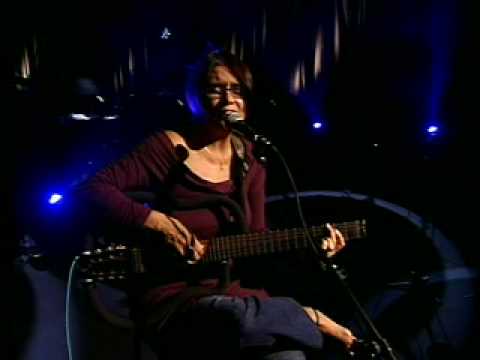 I fell in love with Joyce Moreno—musically, that is—two years ago when I stumbled into Birdland one evening in search of a Brazilian music fix. The well-known composer-singer Dori Caymmi (“Obsession; “The Look of Love”) was playing that night, and his group included a special guest from Rio de Janiero, a woman known only as Joyce.  About halfway through the set, she came on stage, and began playing a remarkably complex rhythm guitar to accompany Caymmi. When she sang, her voice had a rich, full-throated, supple quality: here was a woman fully in control of her voice, and her art. At one point, her husband, the drummer Tutty Moreno, had to stop to fix his high-hat. Joyce grabbed the guitar and knocked off a version of “Waters of March” that left the audience breathless.

I’ve since learned a lot about Joyce Moreno (she began using her last name professionally a few years ago.) She is part of the post-bossa nova generation of composers intent on finding their own way, while acknowledging in their music the foundational importance of bossa nova and samba. For Joyce, finding her own way meant writing songs with a first-person, female-centric point of view—indeed, she was the first Brazilian singer to do so.  In her teens, she wrote a song that began, “I was told that my man doesn’t love me.”  She was immediately engulfed in controversy, as many critics found her approach vulgar.  Although momentarily stung, she never backed away.

Nearly 50 years later, Joyce is still singing songs from a woman’s point of view. “Feminina,” her signature song, is about a girl who asks her mother what it means to be female. She has also been remarkably prolific and adventurous in the course of her long career. Of her two most recent albums, both released this year (though so far only in Japan, where she has a big fan base), “Cool!,” recorded with her quartet, is her interpretation of American standards. “Poesia”  is a duet recording with the pianist Kenny Warner.

Today’s song is a short medley of two of her better-known tunes, “Clareana,” a lullaby she wrote after two of her daughters were born,  and “Monsieur Binot,” which, she once told me, is about her yoga instructor. She has also recorded a version of that song with Gilberto Gil; it turns out that Monsieur Binot was his yoga instructor too.