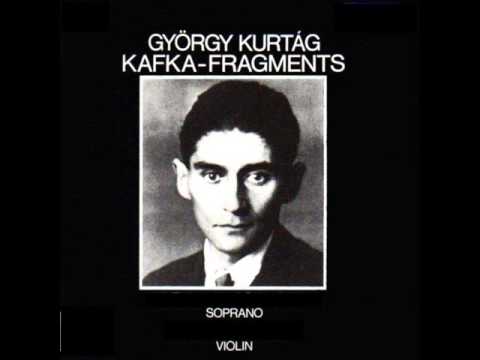 “Kafka Fragments” has the dubious, possibly oxymoronic distinction of being a famous piece of contemporary vocal chamber music – that is to say, people in certain circles feel it’s overdone and basically nobody else has ever heard of it. It’s an hour-long song cycle for solo female voice and solo violin, with texts from Franz Kafka’s diaries and letters. The “fragments” range in length from twenty seconds to ten minutes of music. Each is a fiendishly-notated jewel of expression. Contrary to popular belief, I’m not interested in thorny contemporary music for its own sake—I really have to like a piece to take it on. When my violinist friend Jacob Ashworth sent me this recording of Kafka-Fragmente, I got five minutes in and thought “oh crap, I’m going to have to do this, aren’t I.”

Jacob and I (and eventually our stage director, Ethan Heard) immersed ourselves in the music for the better part of a year. It was slow, hard, painful going. Kurtág himself is famously a perfectionist; he sure wasn’t going to hear about our project, but we wanted to get as close to his theoretical approval as we could. Jacob described the violin part as an etude of literally everything the instrument is capable of; the vocal part contains every note I can hit and a few I can’t. I’m pretty sure I threw my score across the room at least once.

Ultimately it was, of course, one of the most fulfilling projects I’ve ever done. What Kurtág (and Kafka) manage to cram into each fragment is unbelievably dense, rich with layers and meanings. I was most intrigued by the European Jewish angle—Kafka and Kurtág in dialogue about their status in their several countries, across the decades—but the themes the cycle takes on are universal. Dawn Upshaw and Peter Sellars famously staged it as a housewife up to her elbows in soapsuds, proclaiming things like “Coitus as punishment for the happiness of being together.” Jacob and I ended up playing two refugees, nameless and timeless. The possibilities are infinite.

The fragment I chose to highlight is the second-longest, and the last of the cycle. It begins with gorgeous, lyrical lines that disintegrate into the chirping of crickets and birds. Those transform into neo-Hassidic ornamentation for both parts, improvisatory in style but of course notated in excruciating detail, because it’s Kurtág. The text is no less astonishing:

The moonlit night dazzled us.
Birds shrieked from tree to tree.
There was a rustling in the fields.
We crawled through the dust, a pair of snakes.

Kurtág dedicated this fragment to his wife, Marta; his companion in the joyful and terrible exile from Eden that I think this piece depicts. Or maybe it’s just about snakes.