William Bolcom: His Manner is Gentle (from “Lucrezia”) 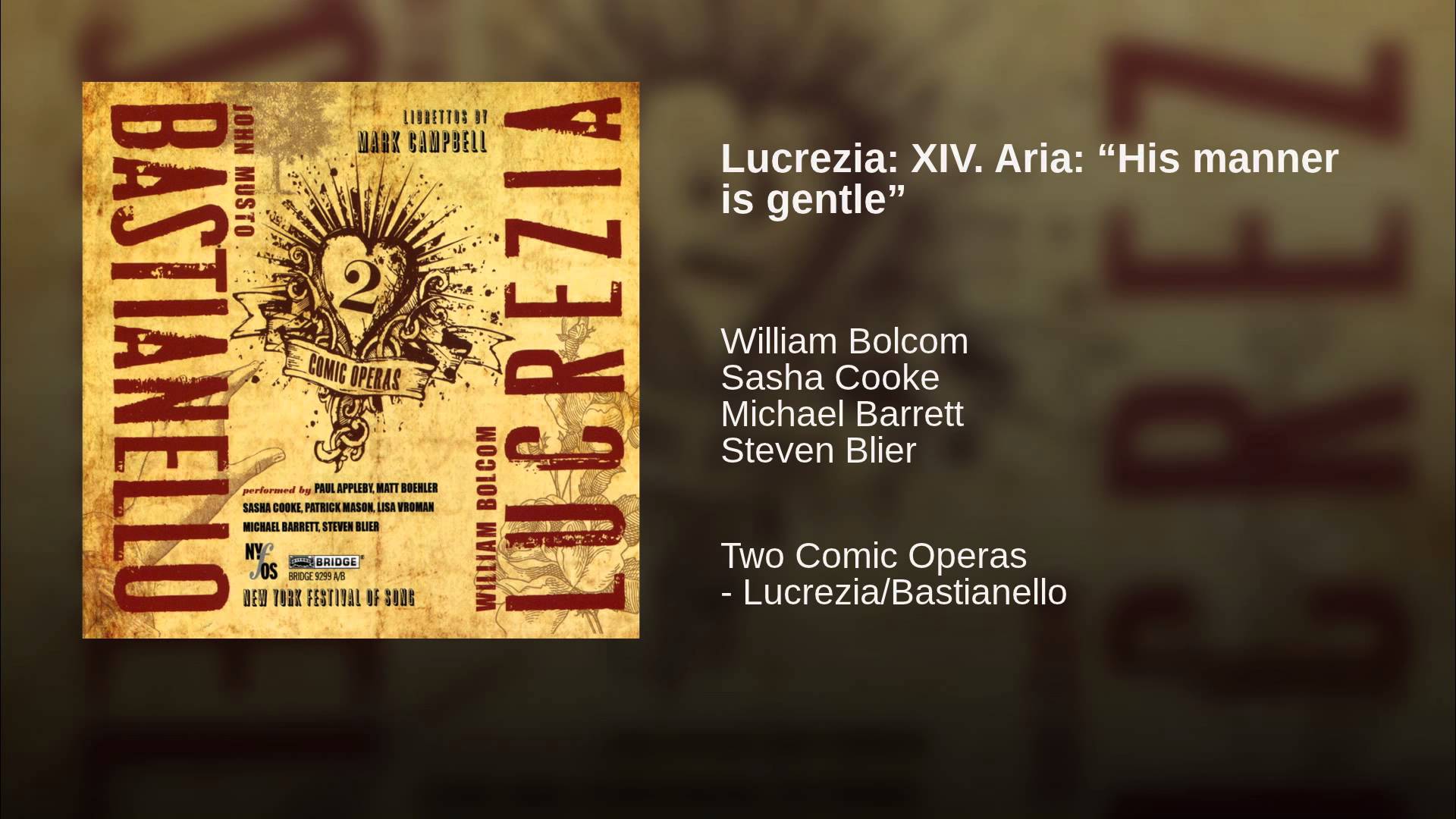 Sasha Cooke walked into my studio at Juilliard twelve years ago, bringing songs from Fauré’s La chanson d’Eve. My life instantly took a turn for the better. From the beginning Sasha had That Sound—I describe her voice as the love child of Janet Baker and Lorraine Hunt Lieberson—rich, intense, somehow fruity and folky at the same time. I knew I wanted to be one of her musical partners for life, also sensing that I would have to share her with a lot of other folks. (Thank God I had learned to be polyamorous as a musician.) I got to see her pretty much every week, and we formed a strong bond as musicians and as friends. (I sort of introduced her to her husband Kelly Markgraf a few years later, but that’s another blog.)

Sasha soon made her New York debut with NYFOS in a program about music’s great patronesses: Godmothers of Song. She was replacing a Swedish singer who canceled at short notice. At the time I was furious, but now I bless that Scandinavian mezzo for giving Sasha the opportunity. She sang beautifully, and that night led to a bunch of other appearances with us, including the world premiere of two one-act operas with libretti by Mark Campbell: Bastianello, with music by John Musto, and Lucrezia, with music by William Bolcom. This was one of our biggest commissions ever, and we needed our A-list players.

Both of those operas gave Sasha a chance to exhibit her first-class chops as a comedienne (where did she learn such perfect comic timing?), and playing the title role in Lucrezia she also got a rare onstage opportunity to be a sexpot. Sasha’s character is married to a seedy older man who prefers the company of prostitutes to that of his wife. His neglect is reaching crisis proportions—not that she loves or desires her husband, but according to the rules of marriage he is her designated bed partner. Lucrezia is in luck: she gets wind of a young man who desperately wants to sleep with her, and unbeknownst to him becomes privy to his elaborate scheme for seducing her. This allows her to get control of the situation. Lorenzo, the young man (played by Paul Appleby), puts on the garb of a fake traveling padre who comes to take her confession on a street corner—he runs a business called “Confession on Wheels,” and the wheels in our performance turned out to be my mobility scooter making its theatrical debut. Lucrezia uses the opportunity to confess her sexual desires in exquisite detail, including exactly how she would like to make love, how long between bouts, and her favorite cologne (Sandalo). Paul, of course, played the scene like a master, writing down each of her requests until he was just scribbling circles on the page with his eyes rolling to the back of their sockets. Since Lucrezia takes place in Argentina, Bill Bolcom wrote Piazzolla-tinged tangos throughout. This tune sounds like a parody of “Makin’ Whoopee”—which is 100% appropriate.

Sasha has gone on to conquer the world with an unusual career that leans towards orchestra, chamber music, and recital gigs more than most of her contemporaries. Conductors flip for her—I remember Alan Gilbert coming up to me after she’d sung Britten’s Spring Symphony with him at the New York Phil, and blubbering, “Steve, this is MAJOR! I mean, this is MAJOR!” I answered, “Oh, yes, of course. But she was major when she sang the premiere of ‘Dr. Atomic’ with you at the Met” “Oh, she was fine…but…this is more MAJOR. I mean, she’s ARRIVED.”

This past June, David Gockley stepped down from his post as Artistic Director of San Francisco Opera, and there was a gala concert in his honor. Susan Graham canceled her appearance a few days before the gig, and Sasha flew in to replace her. She inherited the place of honor: the second-last aria in the program, which was Dido’s aria from the last act of Berlioz’s Les Troyens. She triumphed. I was in San Francisco just after the performance and the place was still buzzing about Sasha’s singing that night. Mark Morash, the Music Director of the Opera Center at SFO, walked into my studio and was almost speechless about what he’d heard. “I mean, Steve, she was…she was…INCREDIBLE. She had a slow aria at the end of a long evening, and I thought, ‘Was this a good idea?’ But the sound that poured out of her! And…the phrasing! The eloquence! The way she handled the space! Time stopped!”

I cleared my throat, remembering that she had been turned down for their young artist program twelve years earlier. Worse than that: when I asked Mark later that day how her audition had been, he could not remember anything about it. I let a moment pass before I said, “You remember, Mark, of course…” He cut me off. “I know. I know. I KNOW! I have nothing to say, no defense. We make mistakes. But she was…GREAT.” “Major?” “MAJOR.”