Lee Hoiby: What If 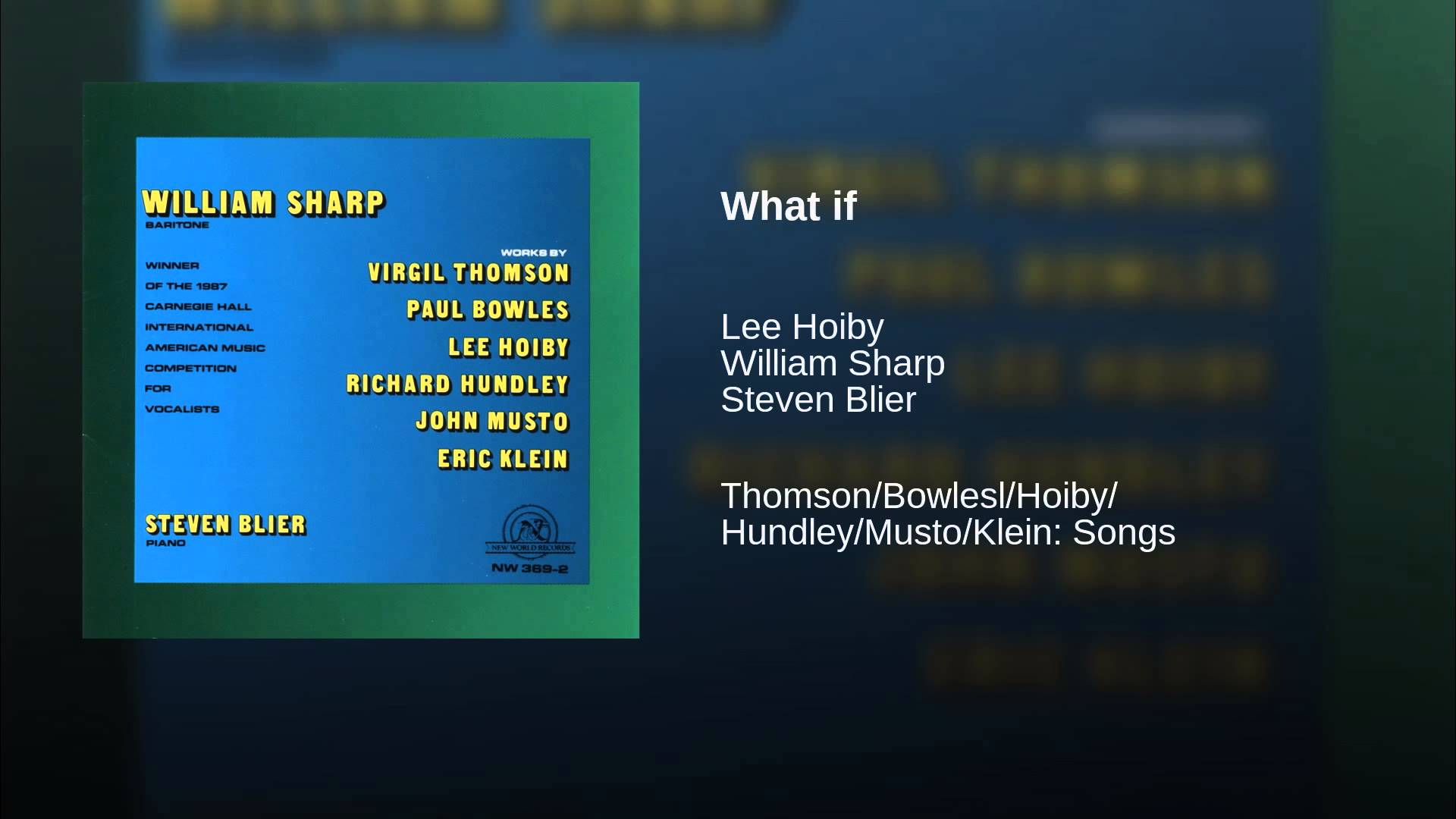 William Sharp has been my most enduring song partner. We met at Aspen in 1978, where he was a fellowship student and I was…whatever I was. An apprentice coach or something. The first thing I remember working on with Bill was the Act I duet from Don Pasquale, what’s known as the “Rehearsal Duet” for Norina and Malatesta. My boss Richard Pearlman, always a musical yenta, had given him a big build-up before our first meeting. This, of course, only made me more skeptical. Bill was a protégé of American icon Jan de Gaetani, who had become a kind of oracle figure (especially at Aspen). Her students tended to have scrupulous musicianship, compact timbres, and a rather intellectual approach to interpretation. They would say things like, “I am working on a rhythmic conceptualization for the first two measures.” And I would think, “What possible conceptualization? It goes boom-chick-boom-chick.” My musical instincts were more theatrically based and emotionally driven. (I think they still are.) Yet when Bill sang Donizetti he demonstrated so much wit and style that he didn’t sound Italianate—instead, he somehow became Italian. I was conquered.

We went on to win a couple of big competitions—Young Concert Artists in 1983, and Carnegie Hall’s International American Music Competition in 1987. My father was still alive when we got first place at Carnegie, and our prize brought a kind of joy to his spirit that I hadn’t seen since he’d gotten sick four years earlier. Of course, the tie I bought to wear at Carnegie was the same one I wore four months later at my dad’s funeral. I was dimly aware this would be true when I picked it out at the store.

Bill and I have had a rich musical life together. We toured the country with YCA, where there were some glorious nights and some less-than-glorious ones. In Bozeman, we had twelve people at the concert, including two in the lighting booth who were making out during the entire concert. The others were there for a class assignment which only required them to be there till intermission. At a restaurant in Tennessee, I asked the waiter if the salmon was a steak (as opposed to a filet) and was told, “No, suhrrr, it’s a fee-ish.” In Kalamazoo Bill got laryngitis and I transposed three-quarters of the concert down a step on a few hours’ notice. (All in a night’s work.) Most importantly, we got to experiment with programming ideas, especially looking for new ways to begin a recital. Our goal, I now think, was to disarm and comfort the audience at the same time—to give them something unexpected but interesting to hook them in for the journey.

Bill and I covered the waterfront musically, from Brahms’s Magelone-Lieder and Mahler’s Knaben Wunderhorn to Gershwin, Ives, vaudeville tunes, and the American premiere of Bernstein’s last work, Arias and Barcarolles. He became my own personal graduate school, intuitively teaching me musical structure, style, and nuance. I learned my trade with Bill.

In those heady, early days of the CD we made a number of recordings together, including one that was a debut album for both of us: a New World disc of American songs by Virgil Thompson, Paul Bowles, John Musto, and Lee Hoiby. It was part of our Carnegie Hall prize. (Lee H. was not too happy about the three wrong notes I played in one of his songs, but I was working from a handwritten transposition by Bill, in which he’d left out a treble clef. I probably should have done that transposition at sight…) Though it got nominated for a Grammy, I knew we had little chance of grabbing that ring. But as I said at the time, “How many snowballs even GET to hell?”

Here’s that beautiful Lee Hoiby song with the three incorrect notes (I don’t remember where they are—for better or for worse, whatever I played works just as well). The poem is by Coleridge, and the tune is called “What If.” It’s a beauty, one of Hoiby’s very best pieces. It’s a good example of how Bill can guide a long musical arc, sustaining the journey with grace and beauty.