Today was the much-anticipated first day of NYFOS@North Fork, our sixth annual project in Orient, NY. The town is at the very east end of Long Island’s north fork (hence the name). If you kept going, the next piece of land you’d see would be….Europe. Our concert has become quite a tradition out here and the town is excited. People rush up to me—well, rush is a slight exaggeration, but they saunter up to me purposefully and tell me that the NYFOS show is always the highlight of their summer. It will be on the last Sunday of August—the 26th—right before we start to gird up for the fall season.

I did a clever thing this year: I decided to remount the show I did at Wolf Trap in late May. It was called “The Art of Pleasure” and it was a big hit. The normally-cool Arvind Manocha, president and CEO of Wolf Trap, came up to me goggle-eyed. “Steve, I LOVED this! It was great! My favorite one so far! It was so…full of surprises!” I had a feeling that the show seemed more modern, more alive, more à propos to him than previous ones. Everyone, in fact, seemed to vibrate to the span of the theme, from seaside vacations to louche romances on the down-low, from peaceful dreams to obsessive-compulsive tics.

One of the Wolf Trap performers was available to come to Orient and repeat his role: Johnathan McCullough. Normally my work ethic would push me to look for a new singer who would start from scratch. But Johnathan performed his material so brilliantly in May that I wanted to give him a chance to deepen and solidify it. And he is also an artist with whom I wanted to create a bond. He’s got the grace to sing Catalan art song, the manic, creative energy to bring Gabriel Kahane’s Craigslistlieder to life, and the chutzpah to cover a classic song by the Kinks (“Lola”—the one about falling in love with a drag queen) with total authority. He sings freely and easily—a warm, soulful sound perfect for Leoncavallo and (oddly) classic rock.

I did another not-normal thing: I invited Amanda Lynn Bottoms back to Orient. She’d sung here four years ago, and she’s done a MainStage show with me since then. I have a rule—well, a guideline—not to give singers a spot in my Emerging Artists programs once they’ve hit NYFOS’ Big Time. But it’s been so hard to book Amanda since she went off to study at Curtis, and I longed for her. She’s a superb singer and a person I treasure. And Lord, did she sing beautifully today.

I broke another rule and hired two people I’d never met at all: soprano Maria Lacey and tenor Philippe L’Espérance. They came highly recommended by people I trust, and I checked them out on YouTube (another no-no converted to a yes-yes for expediency). I met them Sunday and heard them Monday for the very first time. Beautiful, beautiful voices, both of them, and good people. I lucked out.

One lovely thing about today: I have had a long tradition of bad piano-weeks in Orient. No matter how much I’ve practiced, I start playing out here and my hands turn into The Three Stooges, all rubber chickens and pratfalls. When I sit down at the piano, I feel as if I am on the downward part of a roller-coaster hanging on for dear life. I’ve never been able to figure out if it was the room, or the piano, or the time of year. Let’s face it, part of me would prefer to be eating bonbons on a divan right now, not rehearsing five hours a day. But today, I played really decently for the first three hours or so. I got tired for the last bit, and then things got random and rough. But oh, the sweet feeling of competence. Sure, the work I did on the show in May paid off. But this felt like a sea-change. I’ve been doing some of that positive-mantra stuff, and the exercises athletes are taught to do—you know, envisioning yourself as coordinated and not making a total mess of things. And it kind of worked…! 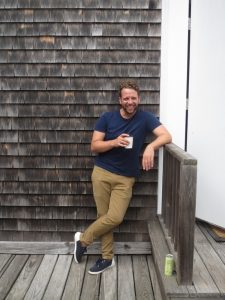 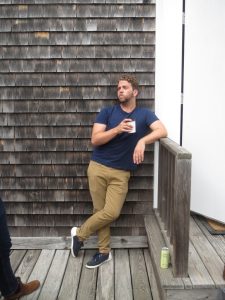