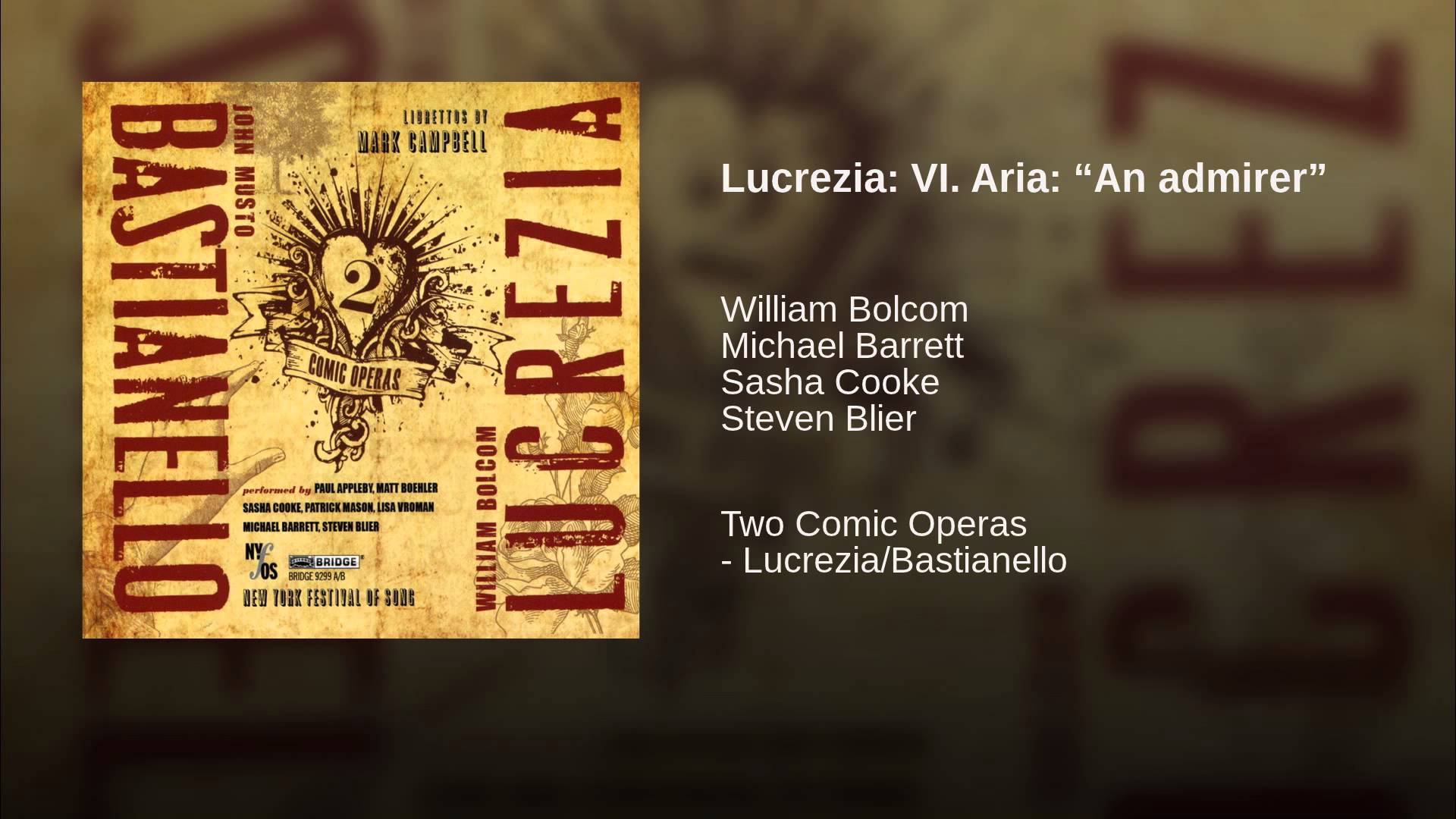 To celebrate NYFOS’s 30th Anniversary Season, Song of the Day is featuring some selections from our commercial recordings, along with excerpts from the notes that accompanied them. Inspired by last week’s celebration of William Bolcom at our NYFOS@Juilliard concert, here is an excerpt from Steven Blier’s program notes for Bastianello and Lucrezia, NYFOS’s double bill of comic operas, commissioned from composers John Musto and William Bolcom, with libretti by Mark Campbell.

Although Bastianello’s libretto was the first to be written, the first music we received was the score to Lucrezia. This Machiavelli classic was the second idea Bill and Mark had for their opera; they initially considered a play by Johann Nestroy called The Talisman, about a town with a prejudice against redheads. But they both felt it would need more than one act and a larger cast to work. Machiavelli’s La Mandragola was Mark’s next idea, and he eventually convinced Bill that the idea had legs. “I liked it because it was centered around a woman,” Bill told me, “and (in our version) a woman who comes out on top. I had only one proviso: I wanted to set it in Argentina.” Why? “Well, I wanted to write a zarzuela…as imagined by the Marx Brothers.” I wondered if Bill was aware of how much Spanish and Latin American music NYFOS has programmed over the last two decades—and if he knew of our programs dedicated to Spanish light opera. “Oh! No. Well, that’s a plus, then!”

Indeed, Lucrezia melds the smoldering musical worlds of Astor Piazzolla, Osvaldo Golijov, Federico Moreno Torroba, and Enrique Granados with the comic sensibility of an American screwball comedy. In Lucrezia, Bill and Mark created something I have longed for: the first zarzuela packed wall to wall with great tunes and great jokes. Having played so much Latin music, I was aware of the many styles Bill used in this score—and not all of them Spanish. The overture recalls Raymond Scott, the genius of American cartoon soundtracks. But soon there are Lecuona-style tangos (Lorenzo’s first aria), then fierce Andalusian bullfight music (the duet for Ignacio and Chucho), elegant scenes that recall Granados at his most refined (the final duet for Lorenzo and Lucrezia), scintillating waltzes à la Rosenkavalier (the duet for Annunciata and Lucrezia), fiery jotas (Lucrezia’s “potion aria”), a section that I could swear is a sly tribute to Ned Rorem (the beginning of the bedroom scene), gestures that recall Rossini and Verdi, and an hommage to James Brown. Throughout, there are wonderful harmonies redolent of American jazz.

I commented to Bill that his evocation of Argentina had a lot of Spain in it. He explained, “No, the piece is neither intrinsically Argentinean nor Spanish. All those cultures shared their dance rhythms, there was always a lot of trading around. Tangos and habaneras started in Cuba and quickly migrated everywhere. I’m not into the authenticity of it—I’m into the fun of it.” Bill saw Lucrezia as part of a larger tradition. “I once saw some Yiddish operettas—I couldn’t understand all the words, but the situations were the same as in all light entertainments: mothers and daughters, marriages, philandering guys. They were hugely enjoyable, and that’s what I wanted.” — Steven Blier