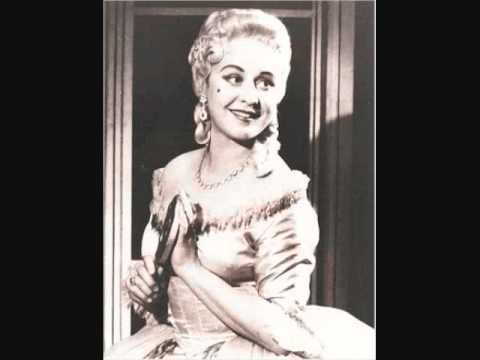 Richard Strauss has written some of the most satisfying, sensual music I know, as well as some of the most irritating. He has two entries on my “Operas I Won’t Ever Go To Again” list—no, I am not saying which ones—but how could anyone live without the “Four Last Songs”? As the autumn begins, let’s sink into “September,” a sublime setting of a poem by Hermann Hesse. There have been many beautiful recordings of this song—della Casa, Schwarzkopf, Popp. Here’s an out-of-the-way performance I love: the very young Sena Jurinac in 1951, with the Stockholm Philharmonic under the baton of Fritz Busch. You can find later, darker-hued performances of this piece by her on YouTube, but here she has clarity and cut and the sweetness of youth. Effortlessly full, her voice sails over the orchestra. Jurinac’s trueness of pitch, clean intervals, and pure attacks are remarkable for any classical singer, but for a Slavic soprano they are positively revolutionary. She never sang at the Met. She was supposed to make her debut as Barber’s Vanessa in 1958, but after studying the part for a bit she withdrew. As Rudolf Bing said, “The problem with Jurinac was that she was either at the end of a love affair and couldn’t travel, or at the beginning of one, and wouldn’t travel.” Thank God for microphones and magnetic tape. Her voice has been a ghostly presence in my life since I was a teenager—kind of an antidote to the neurotic intensity of Elisabeth Schwarzkopf.

The garden is mourning,
the rain sinks coolly into the flowers.
Summer shudders
as it meets its end.

Leaf upon leaf drops golden
down from the lofty acacia.
Summer smiles, astonished and weak,
in the dying garden dream.

For a while still by the roses
it remains standing, yearning for peace.
Slowly it closes its large
eyes grown weary.