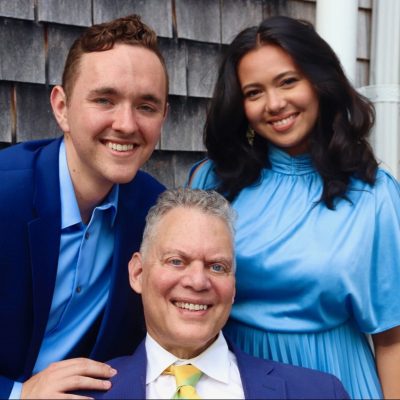 I won’t bury the lede: the concert went beautifully. Sam and Nicoletta sang with a sheen and a sophistication far beyond their years, and they have stunning voices. At intermission we had a visit from a Parisian audience member, who gave the concert his blessing and said that the French was “spot on.”

This may have been an intimate concert in a charming non-urban locale, but it had taken on a disproportionate amount of importance in my psyche during the past three months. Simply put: would I keep my wits about me in front of an audience? I’d certainly logged my practice hours since mid-May, but I didn’t know if that would appease my inner demons.

The answer came quickly: I felt fine all afternoon. Yes, I had a clam in the very first piano phrase, a mistake in a place where I had never made one before. But I was on top of almost all of the difficult phrases, and my body was moving with a pleasant kind of fluidity about 93% of the time. Beauty was my first goal, with accuracy just a step behind. I still want to make more progress with both—but I wasn’t unhappy with what I was able to do yesterday. Oh—that present I said I’d buy myself if I got through it in one piece? I bought it.

I realized two things afterwards. One: the places I had mini-screw-ups or near-misses usually came when I was actively trying to relax. I used to require those moments to re-set the machine by releasing accrued tension in my forearms. This time, that perfectly good impulse just blanked me out, launching me into an unwelcome state of “Elvis has left the building.” Every time I tried to enter my Zen garden, I would start to lose control. I was glad to see that I wasn’t carrying so much physical tension, even though the sustained concentration I now need is difficult without those time-outs I once took.

The second realization is closely related to the first: I cannot work from imagery and narrative as much as I could when I was younger. Then, I was able to treat songs as the soundtrack to imagined dream scenarios. The notes were the incidental music to my made-up stories. Of course I still have my inner cineplex, but it’s most useful at the very beginning of the song, or even before I begin to play. Three measures in, I have to give most of my mental energy to the 88-keyed machine I’m running. Yes, the movie is still running, but in the background. The soundtrack—also known as the piano part—takes precedence.

In past years we easily filled Poquatuck Hall—and then some. This time, ticket sales were slower, for a variety of reasons. The concert was earlier in the season and an hour earlier in its start time. Publicity had been slow to get underway.

It looked as if we’d have a respectable crowd, but about a quarter of the people who bought tickets didn’t show up. The wave of bad news about the Delta variant crisis made some listeners reluctant to be in an enclosed space with their neighbors—in spite of the fact that everyone was vaccinated, their temperature was taken at the door, and they were masked. Still, the hall was decently full, and the response was rapturous. One woman came up to me to thank me for the performance, saying, “You’ve saved our lives.”

I felt it too. Listening to Nicoletta Berry spin out Canteloube’s “Bresairola,” or Sam Kidd plumbing the depths of Mahler’s “Zum Strassburg auf der Strand,” I felt the power of good in the world: the power of art, the power of youth, the power of companionship. It would be unseemly for me to maunder on about the gifts of my two young colleagues. Suffice it to say that the musical world is in for an enormous treat as they step into their careers. I hope to be along for as much of that ride as God allows.