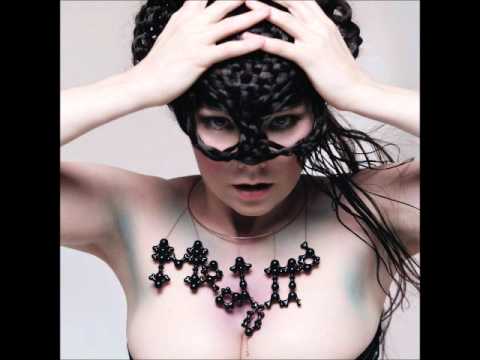 I encourage all of you to explore Björk’s work. Most of us think of her as that crazy Icelandic woman who showed up to the Oscars in a swan dress—how outré! She’s actually a prolific producer, composer, and performer of her own music. Her singing really threw me at first. Later it grew on me, as strange, imperfect voices are wont to do on all of us.

It’s hard to know where to begin; her body of work is extensive. She’s been a professional musician since she was a teenager, is fifty-one now, and shows no signs of letting up. Her albums travel through the decades from punk to Europop to electronic lullabies to protest anthems to a multimedia science project about the natural history of Earth. Vespertine (source of the infamous swan dress) was my gateway drug, but I have yet to hear an album of hers I dislike.

Her experiment on this album, Medúlla, is to produce music created entirely by human voices. She distorts and instrumentalizes her samples, but ultimately every sound has roots in somebody’s larynx. Nowhere is this more evident than on the track I picked out for today. Its structure is functionally that of a choir and soloist; I think choirs have actually performed it in concert. It’s also one of the rare occasions on which Björk performs an entire song in Icelandic, her first language. Most unusual: she composed neither the music nor its lyrics. The composer is Jórunn Viðar, Icelandic pianist and composer, and the text is a setting of a poem by Jakobína Sigurðardóttir—so perhaps Vökuró is the most art-song-like of Björk’s output.