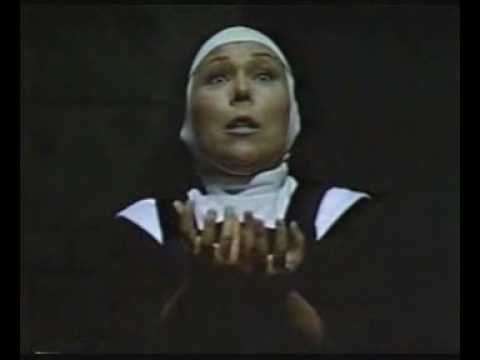 I had two experiences with opera last week, and in different ways they both involved water. The first was the new Met production of Donizetti’s L’Elisir d’amore, which struck me as the soggiest performance of that work I’d ever seen. It was hard to diagnose what put the dampers on this damp show. There were a lot of talented people on the stage, but the evening was like watching someone try to light a wet match.

When the curtain went up it wasn’t obvious that we were seeing a concept production. Far from it—the sets were traditional and the period costumes were truly elegant. But the relief of not seeing the chorus housed in those ubiquitous Met spice-rack boxes quickly dimmed. The whole evening was curiously lacking in sparkle—it was more like spackle. A few strange things happened: Adina (Anna Netrebko), wearing a top hat, pulled a knife on the vain Sergeant Belcore (Mariusz Kwiecen) before letting him feel her up about sixteen bars later. But the strangest thing of all was that this foolproof Donizetti masterpiece had the charm of a frozen Chick-Fil-A. All I could think was, “DUDE, what did you do with my OPERA?”

When we got home Jim was reading the program notes (I was too depressed to read) and he said, “Oh, it says here that it was supposed to be about the Risorgimento.” “WHAT?” “Yes, and that the army was supposed to be the occupying Austrian army.” “REALLY? I thought we were seeing L’Elisir d’amore, not La battaglia di Legnano.” The latter, of course, is one of those early Verdi barn-burners designed to fire up the Italian people in their quest for unification. Elisir, I thought, was the apotheosis of commedia dell’arte, a heavenly blend of comic archetypes and early romantic sentiment. It seems that “concept” can bite you in the butt. That night I was hearing Donizetti’s music, but it had the effect of a mediocre performance of Berg’s Wozzeck.

The next night my computer was still on the kitchen table when we were making dinner, and to soothe my still-wounded soul I went on one of those YouTube jags. For opera fans, this is the equivalent of falling down Alice’s rabbit hole, and equally magical. One irresistible clip leads to another and it’s almost impossible to stop. As I was chopping vegetables for a salad I clicked on Renata Scotto’s final scene from Puccini’s Suor Angelica at the Met in 1981. Dicing cucumbers and quartering tomatoes from the farmer’s market, I was transported by Renata’s staggeringly powerful performance. I was too mesmerized (and too covered in tomato drippings) even to enlarge the picture to full-screen. A canny mixture of calculation and abandon, Scotto held nothing back. She was Norma Desmond and Eleanora Duse rolled into one, stagy and sublime, Her death scene–an achingly slow collapse to the ground which I’d once seen her try to teach to a young American singer in a master class–held me transfixed. I was seeing life, death, and miracles on my MacBook.

The clip ended and I abruptly burst into tears. Not the polite kind, but alarmingly loud sobs, wails of grief and catharsis and mourning. Jim is used to these sudden bouts of emotion at the end of Verdi operas and during Gilbert and Sullivan overtures, but these waterworks were on an epic scale that caught him off guard. They lasted a while. They were tears of grief for a lost era of opera, but also tears of joy that I could still respond so deeply to the music I’ve loved most of my life. As Norma Desmond would have hissed, “It’s the operas that got small!”

I had a remarkable moment onstage yesterday. I have not, in truth, loved performing very much in recent months, for...

END_OF_DOCUMENT_TOKEN_TO_BE_REPLACED

We had to move our dress rehearsal from Caramoor to my house. The weather was predicted to be bad—yesterday we already...

END_OF_DOCUMENT_TOKEN_TO_BE_REPLACED

We complain about all the Zoom lessons and What’s App meetings we’ve had to endure in the last two years,  but they...