I had hoped to get all of my NYFOS shows programmed by the end of summer. Labor Day came and went, and I still hadn’t finished them. In fact, my Tchaikovsky show was a complete blur. I felt as if I had let myself down, and was ready to drown my sorrows in a vat of Haägen-Dazs. But then two things happened. (1): I realized that summer isn’t actually over till September 21st, and (2): I woke up at 3 in the morning last Thursday, and in my sleep I’d figured out a fantastic way to do Pyotr the Great. I am declaring this a victory. Yes, I still have a few more songs to choose, but I am 85% of the way there. I am pretty sure that NYFOS audiences will get a chance to hear John Brancy belt out this beauty by Adam Guettel, albeit in a lower key. “Awaiting You” has all the Adam trademarks—a gorgeous harmonic progression, a lyric that provokes and stimulates, and a white-hot opulence that never fails to conquer me. Here is the unbridled Billy Porter, who gave the first performances of the song. 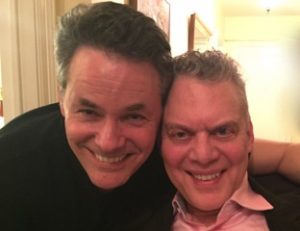