Wednesday is pretty much the last day I can work intimately with each singer. From here on in, we need to put a show together, bash away at memorization, and fit each song into the longer arc of the program. So I scheduled a bunch of individual sessions to talk through big ideas and correct small errors. An almost-negligible flaw in a phrase sometimes reveals a larger, more important issue, something worth discussing. And it always takes me by surprise, the tiny blip that leads to big progress.

My forty-minute session with tenor Philippe L’Espérance was especially significant. I met him just three days ago. No doubt about it, he’s got a very special voice and a heart of gold. His songs were going fine, but they were still a bit neutral. I could see there was more there, but how to get at it quickly? I’d been trying to lead him through his material by playing it super-expressively, with almost exaggerated musical gestures. My signals weren’t paying off the way I wanted them to, so I took a risk and said, “Do you mind—I never do this—if I play you ‘Freundliche Vision’ the way I hear it?” I then did a supersaturated rendition of the Strauss piece as a solo, big dynamic contrasts, bar-lines the width of the Colorado River, the whole ecstatic nine yards. I practically needed a shower when I was done.

“Got that? Wanna try it…?” I ventured. “Sure,” said Philippe. And then a surprising thing happened: he replicated almost all of my musical gestures—I was amazed that he’d absorbed them—and what had been lovely but prosaic was suddenly beautiful and poetic. It was all there inside him, latent, ready to go. He just needed to step into the picture. And we were finally making music together as a team, not merel executing a musical score in parallel play.

I didn’t tell Philippe about the last time I played this song. It was in 1999—I remember because my mom was still alive—and the singer was Jessye Norman. During a period when she was on the outs with her regular pianist (a sensational musician named Mark Markham), she engaged me for an out-of-town recital to try out my wares. We had about three rehearsals, two up at her place in Croton-on-Hudson, one at mine. I enjoyed her company very much—Jessye can be extremely charming. Playing for her was more of a challenge, particularly at that later stage of her career. She had a very idiosyncratic sense of tempo that I would call Extreme Rubato. I pride myself on being able to fall in with most singers’ phrasing, but for the life of me I could not figure out what Jessye was up to. Ever. I simply did not know when the next eighth-note was going to fall. Sometimes I kick myself for not being as prepared as I should have been for those rehearsals, but there was no way to be ready for those one-of-a-kind swerves and swoops. They made sense to her but I could not catch onto them.

I did my best on concert night, but it’s hard to make a good impression when you literally don’t know when to depress the next key. And I did not get re-engaged. Jessye told the mutual friend who introduced us, “Steve is lovely, but he plays in the modern way, and I need someone who plays in the old-fashioned Romantic style.” I wish I’d been able to find the kind of release Jessye wanted, but that sort of musical freedom needs two partners who play off of one another by listening and collaborating. Your gesture leads to my gesture, which leads back to yours. And that was NOT the gig.

So I thought of Jessye Norman as I tried to lift Philippe into the “old-fashioned Romantic style.” I couldn’t get there with Norman, but Philippe got there with me. He provided a balm to an old wound.

Later in the day I cracked another problem. Maria was not quite letting herself go the distance in her cabaret song “Humphrey Bogart” (by the great songwriting team of Leiber and Stoller). I could see she saw what the piece needed, but couldn’t quite find the inner release. What to do? 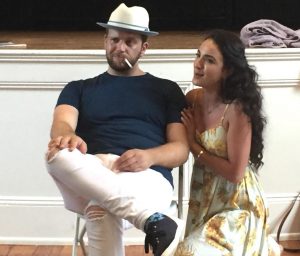 Flash of inspiration. Give her an actual Humphrey Bogart to sing to. “Um, Johnathan, can you put my hat on, sit in that chair, and be Bogart for a few minutes?” “Sure. Wait a second.” He reaches into his bag and pulls out a vape cigarette. In life, Johnathan is caring and gentle, a generous and tender human being. Onstage, he is uninhibited and fearless, with loose hips and a rapid-fire imagination. Wearing white jeans, he settled into the chair, dangled the cigarette on the corner of his lower lip, assumed a low-wattage sneer, and crossed his legs. Voilà, a deliciously indifferent, insolent Bogart for Maria to sing about. I was afraid that Johnathan might upstage Maria, but Amanda told me, “No—I couldn’t take y eyes off her.” And I worried that the song was really about the fantasy of Bogart, not a real live onstage sexy beast

I threw my scruples aside. The kid stays in the picture. The fake cigarette sealed the deal, not to mention Maria’s captivating, wild rendition. 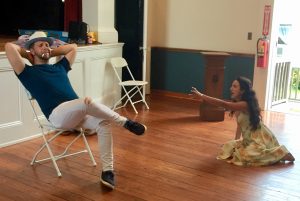