When I first did “The Art of Pleasure” at Wolf Trap I shared piano duties with a man I treasure, both as a musical partner and friend—Joseph Li. He’s an almost intimidatingly beautiful artist, versatile and virtuosic. In Orient, alas, I am going it alone, which makes “The Art of Pleasure” a lot more art but somewhat less pleasure for me.  Joey and I played some of the songs together and our duetting made me giddy with joy. We started our version of the program with a duo-piano overture, the wild “Libertango” by Astor Piazzolla. It was the second time we’d collaborated on a Piazzolla barnburner, and again it was in a transformative experience. Playing Piazzolla morphs me into a totally different person for the piece’s five-minute duration. I become a tough, hard-drinking, belligerent, two-pack-a-day straight guy with a five-o’clock shadow, aching for a barroom brawl. Attacking the piano like a weed-whacker, I play with a gleeful aggressiveness I’ve never experienced in my entire life. And I am in heaven.

In Orient we don’t have two pianos. No Piazzolla, then. But I still wanted an overture. Since the first group of songs is about the seashore in beautiful southern Europe vacation spots, I got the idea of doing Debussy’s gentle “En bateau,” a piece WQXR used to use as theme music for some 6 PM show when I was a kid. The melody functions like Proust’s madeleine, taking me back to a long-ago era in my life. But who would partner me?

An inspiration came to me. I have a good friend out here in Orient, Tenoch Esparza, who studied piano seriously when he was younger. He even attended the Moscow Conservatory—he must have had some serious chops. These days he’s involved with another branch of music altogether, an advanced electronic drum system called Sunhouse that he developed with his brother. He hasn’t played in public for some time, but he accepted my invitation as duet partner. I was delighted.

Today was our first rehearsal. It took us a little while to get used to, well, everything—our physical positions at the piano, the timing of the music, the angle of our arms, even the edition of the score we were using. (Mine had better page-turns, but his made it a lot easier to keep the ensemble together.) And we were a bit nervous around each other. It’s always like that when you collaborate with another pianist. This is someone who can see all the good and the bad, the talent and the shortcuts, the real and the fake, the agony and the ecstasy. Let me add that giving up the pedal to someone else is an act of intimacy, trust, and Lenten renunciation. 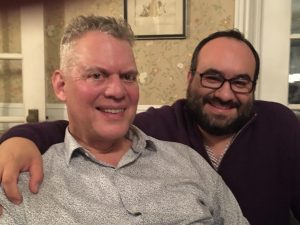 Making music is a beautiful way to bond with someone you like. Tenoch is a soft-spoken polymath: a very brilliant tech-guy with an MBA, a degree in Slavic languages, and musical training from the school where Tchaikovsky taught. But he put all that artillery aside to bring a delicate, transparent piece of Impressionism to life in Orient. It took each of us a while to shed our clumsiness and our self-consciousness, but soon we were sailing. Tenoch made my heart sing.

Thursday is the first day the cast goes off-book, and with that added pressure some of the progress we made backslid a touch. The tiny out-of-tune note that was fixed was sharp again; the smooth line of another song got a bit choppy; the shimmering spin turned a little metallic. I gave gentle, patient reminders. I understood what was happening and was thrilled everyone knew their material. Even their 85% was damn good.

I would have loved to be at 85% myself, but I didn’t think I was even close. It was my own screw-up: I started the day with a two hour and forty minute session, too long a sit for me. In those 160 minutes I felt myself slipping from exquisite artistic collaborator to slobby rehearsal drudge. I recovered a little bit after tea break—“Get an effing grip,” I exhorted myself—but I admit I’d become a little demoralized hearing myself dissolve, devolve, and descend as the first half of the afternoon passed.