The first day of a project is always fraught with excitement and fear and questions—how prepared will everyone be? Is this program any good? Will all my practicing hang in there in the heat of the moment, or am I going to be a total klutz? But this year’s NYFOS@North Fork residency had more unknowns than usual because I’d hired two people I didn’t really know. One of them, the tenor Sam Grosby, I had heard in audition at Wolf Trap. He sang Lenski’s aria, which was beautiful, followed by one of the best performances of “Il mio tesoro” that I have heard in decades: Immaculate coloratura, stunning breath control, and a timbre like honey. But I didn’t think about Sam for Orient until I talked to Theo Hoffman the next day, seeking recommendations for this year’s cast. “There is a tenor you’d like,” he said, “named Sam Grosby.” “SAM GROSBY? My god, I just heard him yesterday. He’s fantastic. I want him.”

We were clearly on a roll. “How about baritones?” “There is someone who would do good work for you—Bobby Mellon.” This was not a familiar name, so I went the route I normally don’t approve of, the dreaded YouTube audition. From the clips I saw online, Bobby seemed like a theatrical live-wire and a take-no-hostages singer. Orient is the place to take a flying leap of this kind. Offers were made and accepted, and the casting was done. I hoped I’d made the right choices, but I just had to wait and see. 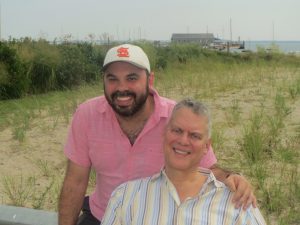 Today was the day I met Bobby for the first time. His voice is the real deal—a rolling, sonorous baritone with money notes actually worth money. He’s also a sweet man, hard-working, and open to all of my crazy ideas. I scheduled our coaching around the time of the eclipse, so we went out to the pier to get our photo taken in the (slightly) waning light.

Sam also came through today—my God, he sings so easily, and with such sweetness. Both guys are ready to take some bold new steps as interpreters, and Orient is the perfect place to do that kind of experimentation. I could see the wheels turning today. “Do you want to run that again now?” I asked. Silence. “No,” each of them said. “I want to think about what we just did…and bring it in tomorrow.”

They’ll both be fitting partners for Mikaela, whose voice is a kind of aural Godiva chocolate. I have developed an allergy to cocoa in the last few years, but who needs candy when you have Mikaela Bennett to listen to?