Today we had two visitors: Marianne Barrett, who coaches German at Juilliard, and Jeremy Lawrence, a specialist in the songs of the Weimar Era. He did the translations for Ute Lemper’s CD of Berlin cabaret songs (we’re using two of them), and he also has his own show, Lavender Songs, where he performs material from the era.

It was good to settle in with Marianne, who had sprained her ankle the day before but toughed it out to be with us for a while today. She has not only an expert’s ear for precise German vowels—and vowel lengths—but also a keen sense of character and interpretation. We mostly agree, and when we don’t no one gets hurt. You haven’t lived till you’ve heard Marianne say the word “knackt.” You could light a bunsen burner with its incendiary snap. I’m pretty good with German diction, having been immersed in it for a number of decades. But I am not so precise about long “ah” vs. short “ah.” Even though they are the same basic vowel, you really need to differentiate them. In Mozart’s Magic Flute, when the Queen of the Night says to her daughter Pamina, “Siehst du hier dieses Stahl?” she is asking her, “Do you see this steel?”—i.e., dagger. It has a long “ah.” If you say it with a short “ah,” you’d be asking, “Do you see this barn?” or worse, “Do you see the fly on my trousers?” 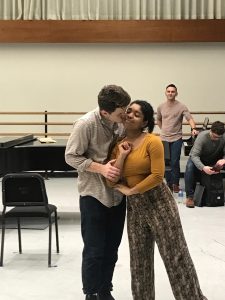 Marianne’s linguistic energy galvanized the cast. She galvanized me too. But the best part came at the end when we sang the encore, Eisler’s “Peace Song.” I wouldn’t say she dissolved in tears exactly, but it was clear she was extremely moved by it and needed a minute to gather herself. Then she went back in for the kill—“Chance, when you say ‘Brandenburger Tore,” more rrrrrr at the beginning of the word….”

When she left we all thanked her for her time and for coming to see us when she ought to be lying in bed with her feet up. “Oh, it doesn’t hurt. It’s just such a bore, I hate being slowed down. Frankly I’d prefer pain.” It was a great exit line from a great lady.

Jeremy came later on and watched a bunch of songs, including the pair that he’d translated. I was hoping he’d like the elaborate staged version of “Oh Just Suppose,” and I was rewarded by hearing him crack up laughing not once but twice. The surprise ending worked, and let me tell you, there is nothing better than hearing a comic song land. Hats off to Jaylyn, Anneliese, Jack, Nikolay, and Mary for making a three-act play out of a four-minute song—and to Jeremy for crafting such an elegant translation.

Another magic moment: William Socolof sang Jeremy’s translation of the Rudolph Nelson song “Peter, Peter.” William has a special way with this song, balancing the character’s self-deprecating humor and deep regret to perfection. “Peter, Peter” could be just a sentimental ballad, but in William’s hands it is soulful and moving. At the end of it, Jeremy walked up to William and embraced him, without saying a word. The piece is in Jeremy’s repertoire and I know it means a lot to him—he made such a beautiful English adaptation of it. Today I was touched as I watched the torch pass from one generation to the next.

At the end of rehearsal Jeremy talked to us about Berlin and its cabaret scene. He brought along excerpts from some essays by a few of the composers and lyricists in our show. As he read them, I felt as if I were seeing a bright spotlight turned on the material we’d been rehearsing all day. I have researched the era, but Jeremy deepened the colors and enriched the context. He also told us first-hand tales about Hollander’s ex-wife—and Marlene Dietrich—and Ann Miller. Jeremy’s depth of field in Weimar cabaret is considerable, and he stoked my passion to keep these songs alive. I couldn’t be more grateful.

Photo above by William Socolof. Jack Kay puts the moves on Jaylyn Simmons, in “Oh Just Suppose,” as Nikolay waits in the wings for his moment.