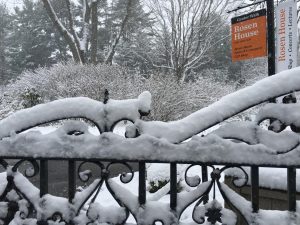 We weren’t sure we’d be able to make it to Westchester today. They predicted a lengthy snowfall with five to seven inches accumulated on the ground by noon. So we made a bunch of contingency plans, and were prepared to load the singers onto a Metro-North train to work at my house in the afternoon. But it turned out to be a fairly benign snowfall in above-freezing temperatures. The roads were clear (and blessedly empty) on the way up to Caramoor, and we managed to stay on course. The grounds were beautiful (see picture). Even the Saw Mill Parkway was a late-winter wonderland.

Michael is just back from a big gig in Hong Kong, where he premiered four songs and also played a couple of concerts—and that trip came on the heels of two huge NYFOS projects in January and February. As a result, I didn’t ask him to play in this performance, but just to coach. After all, I had Ho Jae by my side to take some of the songs and play four-hand piano with me.

It is an interesting way to work. I am onstage, where I mostly see and hear the performers from behind. I am their duet partner, so I have an intimate, moment-to-moment sense of what’s happening. But of course, I am either preoccupied with playing the piano and honing my own performance, or coaching Ho Jae in the songs he’s doing. Michael is in the hall, and sees everything (including me) from out front. I experience certain things vividly from my vantage point, while he perceives other things from his. We become a George Foreman grill of team-coaching, applying heat from both sides of the footlights. I am oriented to the lyrics, Michael to the action, both of us to the musical nuances. I know some of the songs more intimately, he has a far better understanding of how to work with Marco Granados (our flautist) and Karen Ouzounian (our cellist). He is good with the singers’ physicality, and I can often help with their singing.

As I was getting dressed this morning I had a stray thought: I wondered how much information about the songs the cast had absorbed. Before we started I’d sent my program note and some other materials for them to read, and of course I’d shared some intel with them during their rehearsals. Had they paid attention?

We are doing one song whose sheet music does not list the composer’s or the poet’s names because it is part of a cycle—they’re on the title page but not the individual pieces. I followed my morning hunch. After we sang the song, I said, “OK, guys, who wrote this song?” Blank, panicked stares. No one knew the composer’s name. Then I picked out a couple of Spanish words that were particular—and important—to this piece, Afro-Cuban terms used in mid-century Havana. “What is Regla? What is a comparsa?” They’d been singing these words for days, but alas, they couldn’t remember what they meant.

In past years I would have blown up and shamed everyone. But I think I am wiser now. I realized that they already felt ashamed, and that in any case shame is not the greatest teaching tool. So I explained about the composer and poet, told the history of the song, translated the words they were unsure of, and then gave them a short lecture on why they need to know as much as they can about the music they sing. I know what singers are like and how they get that way. They are judged on their voices, and nowadays they are also judged on their looks. But no one gives a rodent’s behind about what they know. They just have to sound good. As a result, many singers memorize stuff quickly without really understanding it. And they are often amazingly convincing anyway—they’ve got instincts and chutzpah, which are a huge mitzvah.

Besides that Madame Lincoln, how was the rehearsal? Really excellent. This is a crazy-good program that includes Broadway tunes, vocal chamber music, and a Zulu call-and-response. These folks are hitting home run after home run. Ben navigates the Ravel with beautiful command. And it turns out Jack has a piano high C and a forte high C, and he has them every time he sings the fabulous Cuban song “Tú.” He opens his mouth…and my jaw drops.

Don’t miss hearing all of  them at Caramoor on Sunday, or in New York at Merkin Concert Hall on Tuesday.