My goals today were simple and clear: to get the second half of the show staged, and to see if I could persuade my hands to stop behaving like bouncers at a second-rate strip club. I took a little time by myself at the piano in the morning to deal with item number 2. I can’t say I had a major breakthrough but I did start to feel—and sound—more like myself. And that was a big relief. This kind of problem isn’t uncommon for me during projects like Vocal Rising Stars. No matter how much I prepare I inevitably backslide during the rehearsals, reverting to stopgaps and Hail-Mary simplifications over the course of the long days. And I usually plunge in every morning without taking any time to warm up. But at Caramoor there are two other brilliant pianists—Danny Zelibor and Michael Barrett—to cover the morning rehearsals while I did triage. The music is starting to flow again, and I should be fine for Sunday—as long as I continue to get my alone time at the 88s beforehand.

The second half of the show includes a section about philandering and a section about forgiveness. In life, philandering is quick while forgiving is a long-term proposition. But in our concert the songs about screwing around took a lot more time to stage, because they involve more comedy, more choreo, and more stage business. Our spirits remained pretty high most of the time, and if you ever need a doo-wop trio to back up a singer, may I recommend Devony Smith, Gina Perregrino, and Philippe L’Espérance who served brilliantly as The Pips to Erik von Heyningen’s Gladys Knight in “Do It Yourself.”

The sailing got a little rougher when we worked on “The Tennis Song” by Cy Coleman and David Zippel. In its original setting—the Broadway musical “City of Angels”—it’s a double-entendre come-on duet sung by a man and a woman. In our show, it’s a locker room encounter between two men, one of them experienced with gay encounters, and the other…game for something new. It’s a very well-written piece—David Z.’s lyrics are at the Cole Porter level—but the scene needs to be built carefully, as the guys check out each other’s interest and availability for a quickie.  Philippe was starting to get a little stressed out (“I’m just not quite sure what I’m doing!”) but eventually got the hang of the scene. (Perhaps I should change that metaphor.) However you do have to remind straight guys that a gay pickup is not like tackle football. At one point we told Philippe to tap Erik’s butt with his tennis racquet, and he let loose with a swing that would have made Pete Sampras proud. Everyone in the room jumped—except Erik. 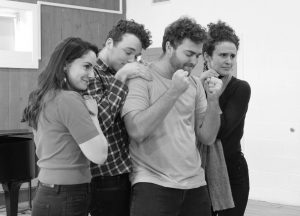 At the end of the day we had just enough time to run the blocking for the first half. Neither Danny nor I went to the piano—this was to be a speed-through to review movement and stage placement. There followed 15 hysterically funny minutes in which the singers dropped to their knees, gesticulated to the stars, seduced one another, and philosophized as they blurted random cue lines. “VOICI L’HEURE!” “INGRATS!” “SAINT BERNARD!” “LORGNETTE!” They acted like Charlie Chaplin on amphetamines. As crazy as it looked (and I do hope someone caught this mêlée on video), it was reassuring to see that everyone remembered everything from yesterday. I know that Stephen, our director, was worried that the work might have gone up in smoke, since we don’t have a stage manager. At least we now know they can do Act I at 78 rpm. Tomorrow we’ll find out if they can do it at normal speeds.

Hear this complex story told through an intricate playlist at Love at the Crossroads
Sun, Mar 17 at 3pm at Caramoor (Katonah, NY) or Tue, Mar 19 at 8pm at Merkin Hall (NYC)