We waited till mid-morning to see if we’d be back in our Katonah Zen-garden, or if we’d be working in the homey surroundings of my apartment. We learned at around 10 AM that Caramoor had lost its electricity in the storm. I never knew that Westchester could be so…primitive. The upshot was that we had a second day of work in Manhattan. This had never happened during the ten years of Vocal Rising Stars. No matter what, we always rehearsed upstate. I feared the change of venue would be disruptive, breaking the spell of the retreat.

And for one of our cast members, it was just that: Matt’s Manhattan apartment flooded in the storm, and he was up most of the night emptying buckets of water out of his kitchen. He reported for work exhausted but game. He’s a pro, and a mensch.

The rest of us were reasonably bright-eyed, at least for the first five hours. At around 6 PM everyone was in a state of quiet meltdown, pretending everything was OK. Like an exhausted child, I had no idea just how tired I was and thought we should keep going for a bit longer. But Mikey took me in hand and persuaded me to call it a day at 6:15 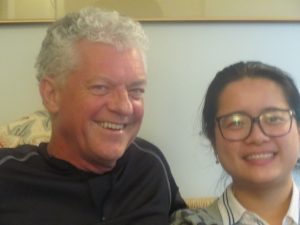 The big event: we welcomed our stage director, Mo Zhou, into the project. I first worked with this extraordinary woman at Wolf Trap last May. She is a fascinating character: born in China and sent to a finishing school in Japan, she completed her education first at Bowdoin College, where she studied the Victorian novel, and then at Columbia University, where she was in their MFA theater program. Working with her is like being on an architectural dig, where you encounter all the cultural strata layered in unpredictable ways.

There are not that many numbers that need staging in this concert, but there are a few, and it is good to have someone to oversee them. Especially if it’s Mo. She’s a force of nature, plunging in with bold ideas and bringing a strong dynamic into everything she touches. Yes, sometimes she needs a bit of editing. But what is wonderful about her is that she welcomes collaboration from all of us. “Mo, that’s too much,” I murmur weakly from the piano. And she says, “OK, OK, I understand, we can do it another way.” In the best sense, Mo is a character. She also has a tremendous imagination and a wonderful eye for the stage. Her years studying the English Victorian novel have come in very handy, especially in the Gilbert and Sullivan scene, the excerpt from “The Haunted Tower” (dialogue and aria), and the Vaughan Williams folk song. In Mo’s hand, the battle of the sexes is just that: a battle. And she got on with Mikey like a house on fire. 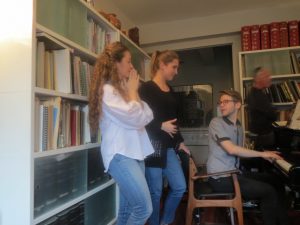 I’ve been so gratified by the work all the artists are doing. The artistic level is very high, the singing ranges from the wonderful to the breathtaking. I hadn’t been sure about doing this program (my typical self-doubt after I make a decision). It had originally been scheduled for last January at Juilliard, but for a variety of reasons I canceled it and ultimately did the PROTEST show in its place. Listening to the music now, hearing one gem after another, I feel that this program is just what the doctor ordered. PROTEST connected us all with our sense of right and wrong, our activism, and the possibility of hope in dark times. It was deeply moving and utterly necessary. “Lute Song/Beatles” takes us to a gentler, more delicate part of our humanity. The elegance of the words and music evoke the most refined, gracious, subtle elements of what it means to be human. And right now I need that affirmation as much as I needed the affirmation I felt from PROTEST.