Yesterday was a trip to the moon on gossamer wings. But today I could see why Wednesday is known as “hump day.” I tried very hard to conceal my fatigue from everyone (including myself), with the clear intention of replicating the buoyancy of Tuesday’s session. Ultimately I disappointed myself, and when I got into the car with Michael Barrett to drive home, I said, “Well, I don’t think I walked off with the Bénédicte Jourdois Prize today…” “What do you mean?” “Oh, I wanted to spread more light, more joy than I did. I wanted to be Mother Teresa, and I didn’t have it in me.” It was a joke, but it was also true.

I may not have felt great, but in spite of my low-octane performance we did have a solid, industrious session of almost six hours. The singers remain interested in all the artistic stimulation and insight Mikey and I can provide, and we do try not to bloviate. But they also know that in a few days they have to sing this program, and our director arrives tomorrow. Thursday was the day we agreed to have the concert off-book, so they are concerned about memorization. They are also figuring out ways to handle the vocal demands of our compressed, intense schedule. They don’t want to leave the bloom of their voices in the rehearsal room.

And therefore it seemed important to let the cast dictate how the day unfolded. I, of course, wanted to do the songs in order. They wanted to attack the things they were most worried about—the a cappella quartet (which they once again sang while lying under the piano, giving them the appearance of the Wicked Witch in “The Wizard of Oz” in quadruplicate); the Sondheim pieces with their rapid-fire dialogue; the Britten duet (now a quartet).

The latter is a setting of a poem W. H. Auden wrote when he and Britten were students together. Wystan Auden was a sexually adventurous gay man, but his friend Ben Britten was still very repressed and timid. “Underneath the abject willow” was Auden’s way of encouraging his buddy to give full rein to his libido—“strike and you shall conquer.” It’s a clever poem, and a clever musical setting. Perhaps too clever. No matter how you sing it, no matter how you spit out the words, the first-time listener will not be able to pick up the simple message: go out and have some sex, for the love of God.

Taking a leaf from Bénédicte’s playbook, I had the cast read the poem, four lines per person, then one line per person towards the end, faster and faster. The room came alive, and when they sang it afterwards it was a lot clearer. (Why did this surprise me?) But Britten often has two voices singing the same line of poetry in counterpoint so that the complex lyric gets tangled in the echo. It helped when we did some detailed balance work—“Devony, you get the lyric over to the audience, and Gina, you be her backup singer, get out of the way.”

But I was still captivated by the way the cast had read the poem—so that’s how Act II is going to start. I want our audiences to get as much as they can on first hearing, and I don’t want to see their heads stuck in their program books. 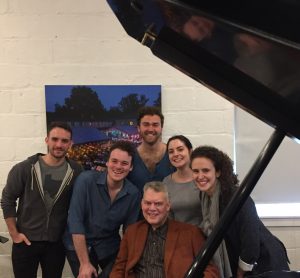 We ended the day with another quartet—the Act I finale, “Outside of That, I Love You” by Irving Berlin. The cast had been doing fine with the piece, but I wanted more of an edge, less musical comedy cuteness. So once again I had them speak the lyric and I asked them to turn up the heat. By 5:30 PM their filters must have been down, and they dug into the insult humor with the panache of Don Rickles. Erik van Heyningen started throwing in some wicked ad libs, which quickly took us out of our comfort zone. When they sang the piece again the fire was still blazing. Erik was a little abashed at the invective that had come out of his mouth, but I was thrilled. Nineteenth-century romantic love poetry might be a heavy lift for these beautiful singers, but they are monsters when it comes to sexy repartee and sophisticated wrath. In life, they couldn’t be sweeter or more generous. Onstage, it’s the Little House of Atreus on the Prairie. I’m loving it.

Don’t miss the sexy repartee and sophisticated wrath in Love at the Crossroads
Sun, Mar 17 at 3pm at Caramoor (Katonah, NY) or Tue, Mar 19 at 8pm at Merkin Hall (NYC)