This is our tenth anniversary at Caramoor—which means it’s my eleventh season as Artistic Director of the Vocal Rising Stars Program. I look forward to these residencies with a mixture of anticipation and fear. The work is intense, and the week’s success depends a lot on the chemistry of the cast. Not only do they have to make music together, but they have to live together. Inevitably I know some of the artists better than others, so I have to rely on instinct and faith.

It was a relief to feel the good vibes in the room when Michael Barrett and I arrived this morning to start rehearsal. Devony Smith, Gina Pellegrino, Philippe L’Espérance, Erik van Heyningen, and pianist Danny Zelibor already seemed like a smoothly functioning machine. They’d had a chance to do some work before Mikey and I got there, and they plunged right into Stephen Sondheim’s “Two Fairy Tales” for us, a tricky duet I’ve turned into an even trickier quartet. They pretty much nailed it the first time, and managed to make me laugh twice. Their voices blended beautifully in the Fauré quartet “Madrigal,” though I wanted the piece at a much faster clip than what they showed us. They’d obviously heard the same performances of it on Spotify that I’d listened to, four dismaying renditions that turned it into a dirge whereas I want it to sound like the prelude to an orgy. Turns out that my crew did too, and apparently it’s vastly easier to sing that way.

The program we’re working on is called Love at the Crossroads. It tells an age-old story: two couples meet, woo, and marry, then quarrel and philander. At the end, they reunite, though it’s hard to say which of the relationships really has survived the damage. They romance each other in French music; they quarrel and cheat in English; and they try to reconcile in German. The music ranges from Fauré, Brahms, and Schubert to Irving Berlin, Jason Robert Brown, and Marc Blitzstein. It’s a show that will need a lot of flexibility, delicacy, and sheer chutzpah.

Luckily nothing seems to faze this group of singers. And I am always fascinated to understand their perspective on material that is new to them, but has been part of my sensibility for decades. This afternoon I had to analyze the charm of an early Fauré song, the irony of a Jason Robert Brown R&B parody, and the sweaty romance of a Saint-Saëns duet. Style is a hard thing to articulate. I could show some of it from the piano, but I had to explain some of it verbally. Ultimately it’s about submitting to the will of the music and letting it seduce you—entering the spirit of the song, not judging the characters from a purely contemporary point of view. Every song asks three questions: what is it now, what was it when it was new, and what will it be for all eternity? The world changes, but art still reflects and refracts the truth. And sometimes it’s helpful to think about what the song meant to its original audiences. 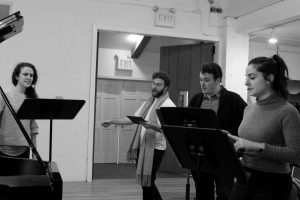 Devony was wrestling with Vernon Duke’s “Just Like a Man.” In this piece, a woman laments that her boyfriend has left her—even though he was constantly thoughtless and unkind. “I am having more trouble with this than with anything.” “You ARE?” I asked, with disbelief. It’s always struck me as truthful, witty, and perfectly funny-sad. “Well, yes, because it’s so against my world view.” I took a moment to understand. “Ohhh, I get it, because she’s addicted to this guy who treats her badly.” “Yes!” My mind went into overdrive—how do I get this very talented modern woman to embody a song written in the late 1940s? “But Devony, don’t you see, it’s totally against her world view too! She hates herself for being this way. She can’t believe she’s selling herself so short.” Silence. “Do you get it…?” Silence. “Oh my god, yes, wow, thank you. Let’s try it again.” And there was the character—rueful, bamboozled by the human condition, and a slave to her sexual attraction in spite of herself.