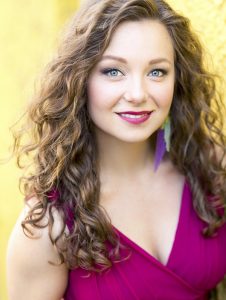 Madison Leonard, one of our most recent NYFOS@Caramoor Emerging Artists, has had a big year! And now she answers our questions as Artist of the Month for May 2018.

You recently won the Metropolitan Opera National Council auditions. (Congrats!!) How did you decide what to sing for this competition?

While the prospect of singing on the Met stage for the first time was pretty daunting, picking the arias I would sing was actually quite straightforward. After being selected as a finalist, I sang my four prepared audition pieces for our conductor and some of the music staff in a private coaching and they advised me on which arias would best showcase my voice in the hall. Of course, the journey to those four pieces was more complicated than that. Those four songs represent a lot of hours of plunking notes, translating, listening to recordings, practicing, coaching, and repertoire recommendations from my inner circle of wise sages.

How do you anticipate winning this award will impact your life, both artistically and practically?

It’s hard to say exactly how winning this award will shape my future career opportunities, but I do know that it was an incredibly inspiring experience and one that I will never forget. In fact, during a quiet pause before I sang the cadenza at the end of “Caro nome” I was so overwhelmed with joy/excitement/gratitude/awe/nerves that I almost laughed! It was such an absurd reaction, but I think it sums up just exactly how fortunate I felt to have been chosen from a group of wonderfully talented young artists.

You’ve also recently gotten married. (Congrats, again!) How do you balance your personal life while working to grow your career as a singer?

Well, it’s quite easy — just have a husband as magnificent as mine! Alright, alright, perhaps I’m not quite an expert yet since I’ve only been married two months. But honestly, I do believe that a balanced personal life leads to a balanced professional life. For me, I know that my singing is much more successful when I’m dedicated to my physical, emotional, and spiritual health first and foremost. Artistry of any kind truly blossoms when there is something substantial and grounded beneath it. How can I expect to be a convincing or relatable actress if I haven’t invested time in knowing myself as a woman or developing meaningful relationships with others? I’m certainly not perfect in those endeavors, but it is part of the wildly complicated and fulfilling lifestyle of being an artist. And also, my husband is a wonderful baritone who understands this wacky world, which really helps.

Earlier this year, you sang in the world premiere production of Proving Up, an opera by Missy Mazzoli. How do you approach learning and performing a new work, as opposed to something with perhaps hundreds of years of performance history and recordings?

It was an absolute thrill to do the world premiere of Proving Up. Both she and the librettist Royce Vavrek are true delights and their intellect, maturity, courage, ownership and collaborative spirits are totally apparent in that score and when working with them. It was my first experience premiering a role, so I did feel a good deal of pressure in honoring the details of the written music (which was pretty complex), but it was also immensely gratifying to mold something for the first time without any preconceived notions of the work. I hope to get to perform many more premieres in the future, especially Missy’s! (*wink wink*)

Are there any projects upcoming on your calendar that you are particularly excited about?

I’m quite excited to debut next season at Seattle Opera singing Chrisann in the west coast premiere of The (R)evolution of Steve Jobs. It will be a very cool opportunity to perform in this new opera but it will also be wonderful to be close to approximately three million of my relatives who live in the Pacific Northwest. Per the previous question, it is not always possible to combine personal and professional lives, so it makes the opportunities to be close to home or family really meaningful. I imagine I’ll have quite the cheering section in Seattle, which sounds pretty wonderful to a girl who has been thousands of miles away from home since high school.

Ok, this is an honest confession. “Babe” by Styx. I listen to it every time my husband and I are apart from each other and there’s really nothing more cathartic than crying to a sappy 1979 rock ballad in your car at the Dulles airport.

If I could wave a magic wand, I would have the time, energy, and geographical opportunity to hike every day. I was lucky enough to grow up in North Idaho surrounded by beautiful mountains and have since always jumped at the chance to go on nature excursions of any kind. There is something about getting your heart rate up outside when you’re marveling at nature, talking with friends, or just escaping daily stress that is so good for the human spirit.

When I think about ‘song,’ I think about stories. What I love most about attending recitals is sitting back and being taken on a journey through the program that has been chosen. And unlike an opera, this story can change completely every three minutes or so. All of these songs, these stories, are just morsels of what it means to be a person taken from every possible perspective. They are written from people in different cultures, time periods, languages, social classes, etc but all attempt to describe one huge or one tiny aspect of the human experience. Many claim a modern dearth of originality, but I believe there are just as many new songs available to us as there are people in the world, stories to tell, and singers to tell them.

I don’t think I’ll ever have a firm answer to this question, but in going with my themes here, I have two solid options: “The Story” by Brandi Carlile and “The Nearness of You” by Hoagy Carmichael.

Today marked the beginning of the tenth season of NYFOS@Caramoor, aka the Vocal Rising Stars Program. Our annual retreat to Caramoor for this residency is a highlight of my year. The unfailing warmth of the people who work there, the calm of the environment, and the feeling of being in a artistic sanctuary feed my soul in a way that few other concert engagements can.

Not that Caramoor doesn’t have its stresses. I hired three singers I knew pretty well, either as students or as recent concert colleagues. I took on a pianist—Adam Rothenberg—with whom I had far less experience, but whom I knew from the hallways of Juilliard. Adam auditioned for me a year ago, and I asked if he’d defer for a season so I could bring Ho Jae Lee to Caramoor in 2017 when I was sure he’d still be in America. Adam was patient and faithful, and so was I.

But I also hired a mezzo I had never met at all. I had been recommended by several people to listen to a young woman named Kayleigh Decker, lately of Glimmerglass Opera and about to enter the prestigious Chicago Lyric Ryan Center. Buoyed by these impeccable credentials, I gave her a modern audition: I listened to her sing Wolf’s “Kennst du das Land” on a YouTube clip. I totally disapprove of YouTube auditions, but I’d be lying if I didn’t admit to doing them occasionally. I liked Kayleigh’s Wolf song very much: straightforward, not artsy, but sung with an even scale, clear words, and a feeling of truthfulness. “I could definitely work with this,” I thought to myself.

Naturally our first encounter was a bit fraught, though neither of us betrayed a flicker of insecurity. It’s important not to flinch. The first thing I heard Kayleigh sing today was “Sound the Trumpet,” a classic duet by Henry Purcell. Great baroque-style coloratura, a clean trill, wonderful breath control, lovely musicianship. I wasn’t the least bit surprised but I admit I was pleased.

It was one of the best opening days I can remember at Caramoor. The cast is, of course, young, but they all seem like old souls. By contrast I feel like a skittish puppy around them, darting off in a million directions. They are grounded, serious, smart, and gifted. We’ll need to make a few decisions about how British we want to sound for this concert. I have trouble hearing words like “earrrrrrth” and “worrrrrrrrrld” pronounced with big ol’ American r’s in this rep. Greg has an admirable command of the British accent, except that occasionally his characters slip into lower-class Londonese, not the King’s English. Today his Strephon in Iolanthe sounded like a sexy blue-collar worker. I kind of loved it, though I know it may not quite echt.

Highlights of the day: Madison Leonard sang Frank Bridge’s “Dweller in My Deathless Dreams” with luminous perfection, every note vibrating like a star, really stunning vocalism. Matt Pearce and Greg Feldmann belted out “Ticket to Ride” with impudence, style, and a shameless amount of beauty. (I got the idea of putting out bowls of panties in the entryway for audience members to take and throw up at the stage during the song.) Adam Rothenberg was worth the wait. What a sensitive, gifted player. I was humbled. And Kayleigh seduced me over and over again with her elegant musicianship. 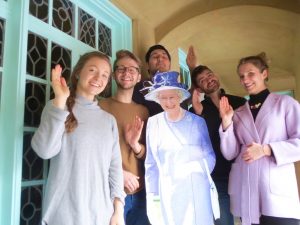 At tea-time, a longtime Caramoor tradition now more appropriate than ever, I rolled up to the table and saw what looked like a woman standing very still, smiling at me next to the hot-water boiler. She was so motionless that I started to get the creeps. Finally I realized it was a cardboard cutout of Queen Elizabeth. She was happy to pose for pictures with all of us. She didn’t mind that I screamed when I realized that Ellie Gisler and Tim Coffee had planted her there.