Norworth/von Tilzer: Take Me Out To the Ballgame

I love baseball. Seriously. Love. Baseball. I’m sure there are many of you who know the pure joy of sitting in the stands on a warm summer day, watching the home team play with verve and amazing athleticism, sipping an ice cold drink, and eating food that is totally deliciously bad for your waistline. And then comes the 7th Inning stretch, where everyone is encouraged to stand up and pretend to show your own hot-dog-and-beer-soaked athleticism by stretching your arms above your head. The park organ (or more likely a sound system these days, sadly) begins to play the lead in to a song that might be the most familiar of all the songs I’ve featured this week. Everyone in the park sings along with “Take me out to the ballgame”, the national anthem of America’s favorite pastime. 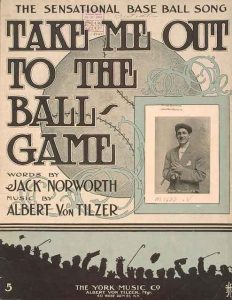 You know it, don’t you? I’m sure you know the chorus. The interesting history on this tune is that is was written by a guy who didn’t really care for sports and didn’t see his first baseball game until 30 years after he wrote these lyrics. Jack Norworth was a vaudevillian, best known for his dance routines. He was an amateur song writer on the side, much like Francis Scott Key. But Norworth was entrepreneurial, always looking for the idea that could sell. The story goes that in 1908 he was riding the train and saw a poster advertising “Baseball Today at the Polo Grounds!” He mused a bit on what could be a more fitting example of a shared “good time” than taking in a ball game, and scribbled down a few verses. He took the text to his frequent collaborator, composer Albert von Tilzer (not a sports fan either) who saw the potential for a hit, came up with a bouncy quick melody in about an hour, and they were off, as they say, to the Polo grounds.

It became an instant hit, sheet music and piano rolls racing off the shelves and was adopted for use at ball parks around the country. But most of us only know the chorus:

Take me out to the ball game,
Take me out with the crowd;
Buy me some peanuts and Cracker Jack,
I don’t care if I never get back.
Let me root, root, root for the home team,
If they don’t win, it’s a shame.
For it’s one, two, three strikes, you’re out,
At the old ball game.

There were verses for this piece, but they fell by the wayside over time. But ever commercial in their approach, Norworth penned lyrics about a young lady who wanted her beau to take her to the park, rather than the movies. He changed the girls name and wove in some product placement over time (beyond being very responsible for keeping Cracker Jack in business), but those verses faded into history.  Here is Edward Meeker, with the full song and the original recording of the hit tune (lyrics for the verses below):

Katie Casey was baseball mad,
Had the fever and had it bad.
Just to root for the home town crew,
Ev’ry sou [common slang at the time for low-denomination coin]
Katie blew. . .

On a Saturday her young beau
Called to see if she’d like to go
To see a show, but Miss Kate said “No,
I’ll tell you what you can do.

Hope springs eternal for Cubs fans. One of the most beloved and beleaguered teams in the sport, they play in an amazing old cathedral of baseball, Wrigley field in downtown Chicago, one of the last places to get lights and start playing night baseball. Harry Caray was the booth announcer, head cheerleader, and spirit animal for the Cubs forever. Ok, not really, but he will forever be the voice of the Cubs to me. His leading of take me out to the ballgame, accompanied by the live organ, is the quintessential version of the song. So stand up, reach above your head, and sing along with Harry.