Frank Loesser: The Brotherhood of Man 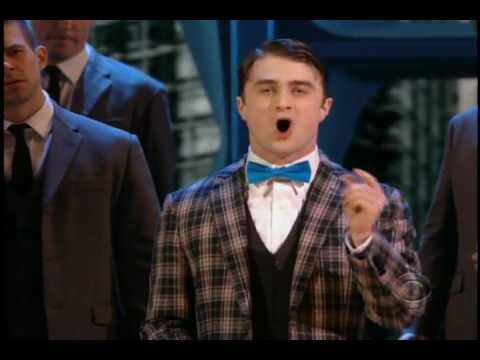 Here’s a song I didn’t quite get until I saw it onstage: “The Brotherhood of Man” from How to Succeed in Business Without Really Trying. Frank Loesser’s score for that show is quite good but not really excerptable—sure, all the songs are à propos to the script but well-written as they are, they pretty much die out of context. I thought of it as lesser Loesser until I saw the production with Daniel Radcliffe and John Larroquette in 2011. Yes indeed, it’s a terrific piece with a terrific score, full of fine songs I’ll probably never program anywhere.

The play climaxes with this huge production number. The chorus boys wear horn-rimmed glasses and suits that must be 50% Spandex, and towards the end they turn the one woman onstage (the secretary, of course) into the clapper of an invisible bell and yank her from side to side while she belts out a bunch of high B-flats. For me, it was show-biz heaven, the triumph of the graceful, fearless, and loony.

I wish all of you a peaceful and satisfying new year filled with new initiatives and lots of time with your loved ones. Like most people, I also wish for a true “Brotherhood of Man”; would that it were as easy as this song makes it seem. Still, for the four minutes of its duration, everything seems possible.

All right: back to my yearly ritual of writing up new year’s resolutions. And yes, I do look at them in May and August and November. I have a whole year to get them right, don’t I?

← Prev Post: Gershwin: I Can't Be Bothered Now Next Post: NYFOS@Juilliard: Day 1 →
Selected posts in the Song of the Day category