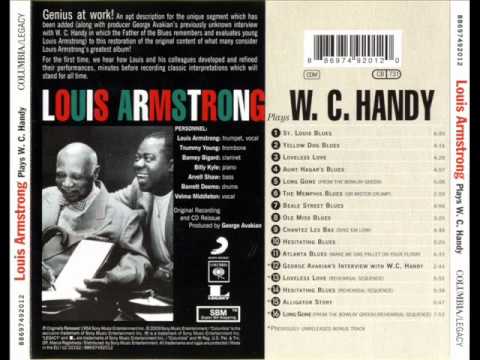 We kick off our week of W.C. Handy songs with his biggest hit, “St. Louis Blues,” a song that has been so-often recorded that no full accounting of the recordings is possible, to be counted in thousands, not hundreds, starting in 1914. Handy wrote the song on a single night at the end of that summer, the year after he founded the Pace and Handy Music Company. His partner Harry Pace was a business genius, which permitted Handy to concentrate on his increasingly busy performing career, punctuated by the occasional song composition and/or arrangement. “St. Louis Blues” has been recorded by everyone from Memphis street singers to Country-Western singers, avant-garde Jazzers, Bing Crosby with the Duke Ellington Orchestra, Guy Lombardo (a remarkably good version), and Minnie Mouse, and it was performed by Ella Fitzgerald dozens of times, some fortunately immortalized on live recordings.  It also appeared in dozens of movies from the 1930s to the 1950s, often to signify sin, especially when connected with the great Barbara Stanwyck. By this time, the song had become so globally popular you could hear it in a nightclub in Sydney, Seoul, Moscow, or Calcutta. A group of African Americans, visiting a Paris nightspot, were serenaded with “St. Louis Blues,” as if it were the U.S. national anthem (maybe it is). The apotheosis of Handy on record is the 1954 LP “Louis Armstrong Plays W.C. Handy,” produced by the legendary George Avakian. Armstrong had recorded the song many times before, and his slow version backing Bessie Smith in 1923 is a treasure. But here, with his All-Stars, Louis really pulls out all the stops, from his impromptu verses to his searing trumpet lines. At a little over 5 minutes into the track, listen for Barney Bigard’s wonderful clarinet solo. Like Armstrong a New Orleans musician, Bigard had the distinction of being the only permanent member of not only Armstrong’s band but also the orchestras of Duke Ellington and King Oliver. This brief solo shows us why.  Enjoy.