The Fifth Dimension: Aquarius/Let the Sunshine In 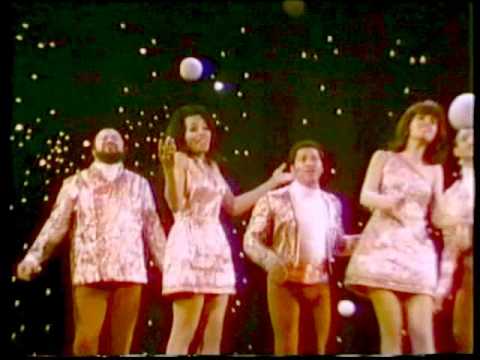 Grammy for Record of the Year (1970) – “Aquarius/Let the Sunshine In,” Bones Howe (producer) performed by The 5th Dimension

So here we are at the end of the decade—1969. The year that saw the moon landing, the Manson murders, the Stonewall riots, the continuing protests over the Vietnam war, and Nixon becoming president. On the music side there was the final performance of the Beatles as a group and their last album together, and of course, Woodstock (which was taking place this day in Aug 1969). And I was 14 and still in junior high.

Of all the years during the 1960s, I think the contrast in songs was at its zenith in 1969. The top selling song according to Billboard was “Sugar, Sugar” by Jeff Barry & Andy Kim and performed by The Archies. It held the #1 spot for four weeks and spent a total of 22 weeks in the Top 100. Keep in mind this song was performed by cartoon characters featured in the Saturday morning series, The Archie Show, based on the Archie Comics, with the audio provided by studio musicians that included Andy Kim. From what I can determine there was no “band” to take it on the road nor to appear live in-concert. For years after 1969, the New Year’s Eve countdown trivia included this question: “What group never appeared together, never went on the road together, never interviewed together, as the group, and had a #1 song?” Of course the answer is The Archies but no one could ever answer it. There is a video of the studio guys performing the song but at the time it seems they did not do live appearances. Its marketing was dependent on radio airtime and the Saturday morning cartoon broadcasts, which clearly worked.

It was the epitome of bubblegum music. I recall it very well as my younger siblings and I would occasionally watch the cartoon series on which it debuted, and because of all of the radio airtime it got. Isn’t it fascinating that with all that was going on in the world at the time, this bubblegum tune performed by virtual cartoon characters out sold the Beatles, Elvis, the Rolling Stones, the 5th Dimension, and the Jackson Five, along with everyone else? I am not going to include a link to the cartoon video, you will have to decide to search and view it on your own. (Bet I got you curious though!)

On the other end was, well…everything else! I am offering the #2 best-selling song for 1969 and Grammy winner for Best Record (1970), “Aquarius/Let the Sunshine In.” It’s a medley of two songs by James Rado & Gerome Ragni (lyrics), and Galt MacDermot (music) that were included in the 1967 musical Hair. It was recorded by The 5th Dimension and spent six weeks at #1 on the US Billboard Hot 100 pop singles chart in spring 1969. What a way to end the decade!

I hope you’ve enjoyed this musical journey through the decade of the ‘60s. We all know how one song can recall memories, whether they’re good or bad, so imagine a whole decade’s worth that occurred during the formative years of five to 14 years old. It was quite a trip…so many songs, so many memories.

p.s. If you decide to watch the “Sugar, Sugar” cartoon video, let me know…I won’t tell. And you will be among one of the 38 million plus!