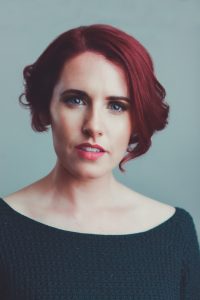 Irish mezzo-soprano Naomi Louisa O’Connell discusses her preparation process, favorite artists, and how friendly New Yorkers really are as our August Artist of the Month. Naomi will join NYFOS for its Mostly Mozart Festival debut on August 8th.

You have wide-ranging resume, featuring operas, cabaret shows, musical theater and even straight plays; how do you decide what projects to take on?

When the jobs come along that make my spine tingle, I know it will be good for me to do it. That tingle might be because the character is hugely interesting, or that a project will stretch me out of my comfort zone, or because I have been dying to sing that particular piece, or to work with that particular artist… any number of things.  For cabarets and recitals, it’s a little different—when an idea won’t quit spinning, that’s when I know it’s time to start programming.

How does your preparation process change when you work in different styles or contexts?  How do you adjust your technique as you move from, for example, a production of Kiss Me Kate to the role of Debussy’s Mélisande?

I always begin with the text.  I have to write out the entire text in my own handwriting, because that’s how I memorize it best (our bookshelves are full of notebooks).  I research the character and time period, and read about the piece.  I speak the text out loud, I move.  Then, I’ll begin work on the music, if there is music in the piece.  And that’s where the difference begins: depending on the style, I’ll work it into my voice in a slightly different way.  I may sing Mélisande and Lilli Vanessi differently but the goal remains the same—to tell the story.  The one thing that never changes, no matter the role, is staying on the breath.

Naomi Louisa O’Connell as Mélisande with the Cincinnati Symphony and conductor Louis Langrée in their 2017 production of Debussy’s Pelléas et Mélisande. Photograph by Adam Larsen/James Darrah

With Mélisande, I was lucky enough to be cast in the play the year before doing the opera, and that was right after a summer where I had spent three weeks at the Dell’Arte International School of Physical Theater, and two weeks of a Shakespeare Intensive at A.C.T. I ended up doing a lot of physical work for Mélisande, which was new for me. For example, I chose an element that best represented her—water: frozen and immobile when afraid, or an impetuous river running far underground. Mélisande absorbs strength from the other people around her, and as she becomes absorbed in Pelléas, her element becomes almost silt-laden, slow moving, more earth-bound. I found out a lot about her (and myself) from working that way.

You have a longstanding collaborative partnership with pianist Brent Funderburk; how did you two begin working together?

Brent and I met in Margo Garrett’s class at Juilliard when we were paired up to work together, and then a couple of weeks later we won an audition for the Vocal Arts Honors recital. It was a pretty instantaneous musical connection and we have worked together ever since. He is a remarkable musician—truly one of the most gifted people I know. We rehearse well together, we love to work on new repertoire, and we always discover something new in every performance.

What is your process for creating a recital or cabaret evening?

An idea starts bothering me. It comes in little flashes at completely random times of the day, generally in images first.  I start gathering songs. Gradually a more coherent narrative emerges and then the song choices come faster. I make a long list of possible runners, generally forty to fifty songs (that part takes time—sometimes months—and it is DELICIOUS). Then, I start whittling the songs down to a suitable program length. Text is a huge component in that process, but the songs that generally make it onto the shortlist are ones where the music is as strong as, if not stronger than, the text. At this point, Brent and I begin rehearsing. We play with the pieces themselves, with the order of the program, with the timings of pauses, and we will sometimes even cut a much-beloved song for the sake of the evening as a whole. Putting songs next to each other and watching them change color as a result, seeing how an evening of twenty different songs can accumulate into one larger arc of storytelling, and then sharing that story with an audience… it’s one of my favorite things to do.

You are a native of Ireland who has been based in the U.S for several years; what was it like to make such a big move?  Did anything particularly surprise you about living here?

Honestly, it didn’t feel like a big move. My mother is an intrepid traveler herself, and has encouraged both my brother and me to be pretty fearless that way. A plane ride away is a plane ride away. Of course, it helped that I met one of my best friends, Paul Sharp, the second day I was in New York.

What surprised me about the USA? Okay, being honest, it took me a while to adjust to the phrase, “Have a great day,” which was pleasantly hurled at me at least 49 times a week. I thought, “There is just no f***ing way these people can be that happy all the time!” It has since turned into one of my favorite things about the States. I find New Yorkers very friendly (as long as you don’t do that linger-slowly-in-the-middle-of-the-sidewalk tourist thing; I learned that my very first day crossing the street somewhere around Union Square).

Are there any upcoming projects on your calendar that you are particularly excited about? (Other than Lyrics by Shakespeare, of course.)

Brent Funderburk and I are returning to Neue Galerie’s Café Sabarsky series with our cabaret The Cheater’s Almanac this December 6th and I adore that program; we have an absolute blast with it. Also, I’m collaborating with an Irish composer called Emma O’Halloran on a new one-woman opera called MARY MOTORHEAD, which will be presented by Beth Morrison Projects in their Next Generation series next February. The libretto is gritty and fantastic, so I’m really looking forward to seeing what Emma does with it. And yes, I am seriously loving this Lyrics by Shakespeare program. Steve is a genius programmer; we all know this!

Do you have any particular artists that you view as role models? In what ways do they inspire you?

I love those role models who break boundaries by not being defined as just one thing. You know when you look up some personality from the 1800s on Wikipedia and it states their name and then an interminable list of professions like poet, composer, herbalist, playwright, juggler, inventor? That. I love that.

Also, Charlotte Rae is a goddess. Everything that comes out of her mouth is because of a choice she has made. There is no gray area or moment where you think, “Oops, she’s not in it anymore, she’s thinking about her singing technique.” It’s all wildly colorful, always about the character, and she is absolutely fearless. A real wordsmith. And talk about a boundary-breaker—she does it all and truly defies definition.

If you could sing with any performer from the past, who would it be?  What would you sing?

He is very much alive, and I would kill to sing a duet with Tom Lehrer. (So, if you’re reading this, Tom: Hello, I adore you, and please may I visit?)  OBVIOUSLY WE WOULD SING THE IRISH BALLAD.

I am on a Tracy Chapman kick and have been listening to nothing but her albums for the last month or so. I adore her voice, her songwriting, her honesty. A sublime artist.

I like hanging out with my husband. He’s pretty awesome.

It’s going to sound corny, but a song is like a friend. They grow alongside us as our own lives change and perspectives shift. And like a scent, there are some songs that take me immediately back to an exact moment in time: sharing headphones and listening to a song with a new muse after too many cocktails, or singing solo for the first time (terrified!) in my church at home. Songs can leap through time. Maybe that’s why we love our old favorites so much; it’s nostalgic and yet new because you’re a different person now than when you first heard it.

I can only answer for today, because this changes literally all the time.

To sing: “A Song About Your Gun” by Jason Robert Brown.

To listen: “At This Point In My Life” by Tracy Chapman.