Kate Soper: Only the Words Themselves Mean What They Say

In the spirit of the Kate Soper NYFOS Next concert this evening, I would love to share the very first piece I ever heard of Kate’s, “Only the Words Themselves Mean What They Say.” This song from Kate’s larger work Ipsa Dixit (translated: she, herself, said it…), which was premiered with a quartet from the Wet Ink Ensemble in 2016 and was named a finalist for the Pulitzer Prize in Composition in 2017.This particular movement contains text by Lydia Davis, who Kate describes as “fabulously quirky, […] slyly profound.”

The thing I love most about Kate’s music is her completely unique integration of words, instrumentation, and vocal color. I find that her music is beautifully economized to serve the message of her carefully curated texts. Kate deals with instrumentation exactly as she deals with the voice, asking for sounds we might consider traditionally “unmusical” to punctuate what she is trying to communicate. One of the most incredible things to watch when Kate performs her music is the flawless coordination between Kate and her collaborative partners. Having worked with her a few times now, I can confirm that she comes to every rehearsal space with exciting (borderline bonkers) new ideas about sound and the capabilities of a given instrument, but what really strikes me about Kate is the open and collaborative spirit she offers to her fellow musicians. Kate is brilliant and has created an iconic and new sound world, but I think it is the raw human-connection component that makes Kate’s music appealing to a wide variety of audiences.

You really will not want to miss the world premiere of scenes from Kate’s new opera The Romance of the Rose tonight at 7:30 at DiMenna center. 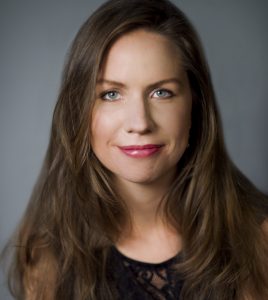 Composer/performer Kate Soper talks about her favorite music to sing and the “strange and wonderful world of electronics and the voice” in advance of her NYFOS Next evening on March 28 at the DiMenna Center for Classical Music.

As you are especially known for performing your own work, I imagine that you have very specific ideas of what you’d like from other singers. How do you react when you hear others’ interpretations of pieces so intimately connected to your own voice?

I’m absolutely thrilled that other singers have begun to perform my work, although it can occasionally be disorienting to hear it, especially if it’s a piece I’ve done myself many times!  (I recall a sort of embarrassing early experience where I unintentionally traumatized a singer by mouthing all the words from the front row while she performed, without even realizing I was doing it.)  My vocal music can be idiosyncratic, with elements of improvisation and extended techniques along with plain speech, which I hope encourages every new take to be extremely personalized not just in terms of vocal sound, but in terms of a singer’s background and style and way of communicating in general. Sometimes another person’s performance will reveal things about a work that I didn’t even know were there as the composer, which is always exciting. Ultimately, my interpretation is only one interpretation.

What is your favorite music to sing that isn’t your own?

I like singing the works of my fellow composers in the Wet Ink ensemble (Alex Mincek, Sam Pluta, and Eric Wubbels) because they take such a different approach to the voice than I do: it’s very instrumental and not “expressive” in the way we normally think of vocal music, so it keeps my chops up and lets me focus on ensemble work without having to carry the foregrounded.  I also adore singing older music: I’ve done a couple of Machaut arrangements with friends, and I recently sang an arrangement of a piece by the 12th century composer Hildegard of Bingen with the Longleash trio.  On that program we also did a little Caccini, and it was really fun for me to play around with the language of vocal ornamentation that was developing in the early 17th century.

You are curating and performing on our NYFOS Next evening on March 28; how did you decide what to feature?

When I was asked to curate a NYFOS show, my mind immediately went to the strange and wonderful world of electronics and the voice. This is probably because I’m currently deep in the process of writing a new opera, and have been loving the protean possibilities for storytelling, character creation, and spectacle that electronics have opened up to me as a composer and librettist. Electronics have so much to offer to the singing voice, whether it’s to bump up its sensual beauty, to provide a surreal landscape for it to play in, or to catapult it into the realm of pure, bewitching noise. I wanted to showcase the aesthetic and stylistic range of this combination, so we’ll have some concert pieces for voice and fixed media by established and young composers like Natacha Diehls, Alvin Lucier, and Kaija Saariaho (performed by the fantastic Charlotte Mundy) as well as a set of improvisations by the magnificent Charmaine Lee and Sam Pluta, who use realtime manipulation to push the limits of what vocal sounds can be. Finally, I’m excited to premiere a couple of excerpts from my aforementioned opera-in-progress, featuring two allegorical characters and their respective electronic manipulations!

What is the last music you sang before answering these questions?

The last music I sang was a work by Anthony Braxton, which I performed with three other members of Wet Ink as part of a residency at the Boston Conservatory. Braxton has an extensive collection of structured improvisations for open instrumentation that can be collaged and layered together in many ways to form all kinds of fascinating sets. Performers of these works have a lot of freedom to make collective decisions about creating shapes and structures from the material, decisions that can be made both in rehearsal and during the actual performance. I find it a really interesting challenge to fit into this world as a vocalist—it encourages me to be open, receptive and flexible onstage, and gives me the opportunity to really listen to and enjoy what my fellow performers are doing.

NYFOS is devoted to ‘song’ and the wide variety of styles that term encompasses. Is there anything about this particular form that is significant to you?

I think the thing I like best about ‘song’ as a form is some idea of storytelling.  Storytelling has always been an essential element of my creative life, and I find that song in all its guises is the best ways to tell a story—because of its infinite expressive possibilities, the ease at which it enraptures, and its prismlike ability to simultaneously present many points of view.

Tori Amos is a truly captivating performer.  Example: I made the mistake of keeping the youtube track running as I was coming up with this intro and quickly forgot how to form words in my brain and type them, as her voice overrode my mental circuits.  Amos runs the vocal gamut in Yes Anastasia, which is also quite a compositional feat, positively Schubertian in the cyclical nature of its material.  As SNL’s Stefon would say, this song has everything: spectral Russian duchesses, a two minute piano solo, symphonic strings out of nowhere, gut-punching irony.  I don’t claim to be entirely sure what it’s about, but when I heard it for the first time as a teenager I know I received some kind of message, about the infinite possibilities offered by songwriting and the dangers of being a woman in this world.  We’ll see how brave you are.

Many works by the famed medieval poet-composer Guillaume de Machaut are formes fixes: complex musico-poetic structures requiring skill and finesse to create.  This is an example of one such form, a rondeau.  In order for a rondeau to work, the first phrase has to hinge musically, prosodically, and semantically both to the second phrase and to itself, creating a fascinating challenge for the composer/writer.  Because Doulz Viaire Gracieus is quite a short rondeau, it’s easy to hear its form–and to appreciate the exquisite polyphony and fantastically outlandish harmonies within.

What is it about vocoders?  They add a distance to the human voice that, in the skilled hands of Laurie Anderson, renders it omnipotent, supernatural.  And marching through the uncanny valley right alongside her processed singing is that “ah ah ah” ostinato, both weirdly neutral and unsettlingly robotic.  The simple mi-re-do-ish tune, with its comforting tonal harmonies, lies in creepy conflict with the unsettling ransom-note lyrics.  Somehow this song manages to get at something sinister about empire and technology while remaining catchy, funny, and oddly touching.

Earl Kim: “thither” from Now and Then

The underrated Earl Kim’s setting of Samuel Beckett’s “thither” occurs twice in Now and Then, Kim’s 1981 song cycle for soprano, flute, viola, and harp.   At just over 30 seconds, “thither” the song is a haunting shiver, a ghost aria, unforgettable even without the reprise.  Beckett’s snatches of text, Kim’s spiky yet delicately mournful music, and Karol Bennet’s vulnerable, seeking performance have stuck with me since I first heard this recording in 1999, proving that you can pack a punch in a tiny package.

Earl Kim, “thither” from Now and Then for soprano, flute, viola, and harp.

Song of the Day: February 9

Featured  on the NYFOS Next Feb. 4 program curated by David T. Little was the music of Kate Soper. David introduced me to Kate’s work, for which I am grateful. OK, she is still pretty young, so I forgive my own ignorance. She performed two excerpts from her full-evening work “Here Be Sirens” written for three sopranos and piano (played and sung into by the singers themselves), and a few percussive rocks. The full work is full of dialogue, pondering the sirens own future after millennia of being stuck on their island. Do they actually “eat” the sailors they lure ashore? You’ll have to hear a full performance.

But what was most striking to me was the virtuosic singing performance by Kate, Brett Umlauf, and Gelsey Bell (also a composer).  They performed from memory and gave a riveting, committed, full-on, even frightening performance. After the applause I waited for a moment, and then inquired, “Is it safe?” before going back onstage.

Below is a link to “O Sailor” which Kate introduced as ” a conventional Siren song” at the concert, along with another piece for her and bass flute “Only the Words Themselves Mean What They Say”. I hope we all hear more from Kate Soper. Tune in Feb. 11 and 18 for the rest of the Nyfos Next series.