In 1925, Kentucky explorer and caver Floyd Collins lost his footing at the end of an expedition. His left leg pinned underneath a 16-pound rock, Collins was trapped in a narrow tunnel, unable to move, and after 17 days (13 of which were without food or water) he left this earthly realm.

Composer and lyricist Adam Guettel imagines Collins’ last moments, his ideations of what the next life might be like in “How Glory Goes,” the gut-wrenching final song in the 1996 musical Floyd Collins. Audra McDonald sings the tune in here in a version that I deeply treasure.

What a voice, what a sentiment, what a song.

Audra McDonald has been a vocal and theatrical hero of mine since high school, when I swore I was going to be a music theater performer (I auditioned for more than one music theater undergrad program! Alas, my movement skills are slightly lacking…). I heard Ms. McDonald live in concert at a point in my life that felt very clearly like a fork in the road, and she set my heart right back toward our sacred art, toward music. I am truly in awe of her presence, instrument, ability, and grace.

Thank you for reading, dear NYFOS devotees! It’s been a pleasure being your guest blogger, and having the opportunity to share the contents of my song-loving heart.

Love and light to all of you! Until next time…!

“I think about this and that, I feel a longing, but don’t know exactly what for: half is joy, half is pain.”

Hugo Wolf (1860-1903) is one of those composers that song people consider their little secret. Because his best-known works are his Lieder (of which he wrote hundreds), he’s ours. He is a singer’s composer. Wolf, like his hero Wagner, places a premium on drama and the complete enmeshing of music and text – his songs are miniature three-minute operas, and a distinct pleasure to perform and study.

One of my favorites is the slowly swung “Im Frühling,” a piece full of the slow and ecstatic longing of springtime.

We are lying on a hillside in springtime. Wolf dreamily can’t settle on a key in Möricke’s quietly desirous meditation on the uncertain longings of spring, and the voice and piano slither around like the disconnected thoughts of the narrator. In long-spun sinuous melody lines, we stand with our hearts open wie die Sonnenblümen, like sunflowers, hear the buzz of the bee in our ears, and wonder when our longing will be stilled, when we will be with our one and only love. Massive and Romantic sighed are sighed.

Even though it’s been a little chilly this season, it’s still May – the month when the magical and heady feeling of the first warm rays of the spring sun dispells memories of frigid winter (many a Midwestern and East Coast springtime familiarized this), the feeling like anything and everything is possible. Flowers bursting forth, after having forgotten what a bloom looks like. The burning sting of allergic eyes and feverish longings that are re-awakened in the springtime heart.

It JUST so happens that Wolf’s “Im Frühling” is the first song that my fiancé, pianist Richard Valitutto, and I ever worked on and performed together when we met at SongFest in 2013. It just so happened to provide the opportunity to connect through this very sensual song about unrealized longing during the very first wisps of our relationship, and I believe it was my suggestion 🙂 Richard will make an arrangement for string quartet, and it will be played during the prelude music at our wedding this fall.

Elton John: I Guess That’s Why They Call It the Blues

In the spring of 2012, I got a real bad case of The Blues. I had just finished grad school and felt like I was supposed to be “done” – a perfect, polished adult, with a budding singing career. Objectively, things weren’t too bad. I was living in a nice apartment in Princeton, New Jersey. I had friends, I had a few jobs, and I had the tendency to drink a little too much on occasion, partially owing to the potent combination of mounting internal pressure and the black hole of uncertainty that is the making of a career in singing.

On more than one occasion during this period of time, I listened to Sir Elton John’s “I guess that’s why they call it the blues” on repeat at 2 in the morning.

It was healing then, and it’s healing now. It’s easy and it’s croony and it’s got a kicky bass line. Sir Elton reassuringly tells us at the song’s outset –

“don’t wish it away, don’t look at it like it’s forever”

In more clear-eyed hours, I’m reminded of the fact that we can’t wish away our pain, we can only trust that it won’t be around forever. As evidenced by this song, we can also enjoy a mean harmonica solo and some excellent air-drumming opportunities.

I clearly remember the first time I felt the capital-b-Blues. The Blues for real, depression for real. It was my freshman year of college, and I recall very clinically noticing that the leaves were changing. I grew up in Michigan, and the Midwestern fall colors had historically given me a sharp feeling of sparkly joy and excitement. This time – in a time of change and budding adulthood – I felt nothing. It was alarming.

Last fall I was on a gig in Philadelphia, in a different corner of The Blues. I was alone and lonely in my hotel room, and asked my facebook friends to share their most potent tearjerker songs with me – it ended up taking the form of a massive spotify playlist appropriately tiled “weeping in philly.”<

That night, an acquaintance concerned with my well-being messaged me and asked me if I was okay. It was a caring thing of this person to do, but it feels important to mention here, in my second SOTD post about tearjerkers, that crying in and of itself does not indicate that you are not okay. Sometimes it’s a release valve. A very dear singer friend of mine likes to say “a cry a day keeps the crazy away.” And it just so happens that Sir Elton reminds us to “cry in the night, if it helps.”

I want to mention that May is Mental Health Awareness Month. Sometimes when I get The Blues, it feels like falling into a hole. A depressive hole that seems very deep, but only because when I’m in it I don’t have the capacity to look up. It’s dark in there, and hard to see whatever light might surround me. But there is always light, and Sir Elton assures us that “things can only get better.” We can always ask for help – or, as Sondheim put it “No one is alone” (speaking of tearjerkers…). We have the power to speak out about our pain, share it with our loved ones, or if needed, seek professional help. And in the meantime, we can listen to our favorite songs on repeat and have a good cry.

I love a song that will always make me cry.

One of my most tried and true waterworks wranglers is Charles Ives’ simple ode to two little girls in his life, “Two little flowers (and dedicated to them)” (1921), performed here by the excellent Bill Sharp and our beloved Steve Blier.

Ives wrote the text himself with his wife, Harmony Twitchell, who wins the prize for name-I-most-wish-I-had. It’s a little poem inspired by the sight of their adopted daughter, Edith, play with her friend Susanna Minturn. It’s small and simple, like the girls themselves, and means so much more than its constituent parts:

On sunny days in our backyard,
two little flowers are seen,
One dressed, at times, in brightest pink
and one in green.

The marigold is radiant,
the rose passing fair;
The violet is ever dear,
the orchid, ever rare;

There’s lovliness in wild flow’rs
of field or wide savannah,
But fairest, rarest of them all
are Edith and Susanna.

While one might wax poetic about the rose, violet, the orchid, the marigold (those art song heavy-hitters) – what is most fair and most rare is the purity and innocence of two little girls, acting like little girls in a backyard in New England in summertime. Sounds of high-pitched laughter, images of scraped knees or messy pigtails come to mind, and I am reminded of two important little girls in my own life, very dear second cousins who are wildly excited to be (very appropriately for this post) flower girls in my upcoming wedding. I’m an only child and the youngest of my first cousins, so playing with energetic, creative, boundlessly fair and rare little girls has been a beautiful and novel blessing of my early adulthood. Their curiosity, positivity, and imagination is inspirational.

Here are my fairest, rarest girls of all – Sabina and Olivia: 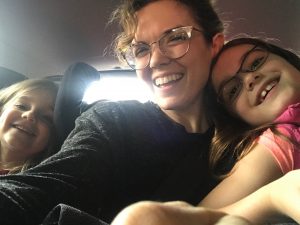 Ives, capable of early modernist sonorities of the head-spinning sort, spins a sweet melody over delicate broken chords, sometimes unexpected in their harmony. For me, it is the G minor chord that occurs on “but fairest, rarest of them all”…that always sets me off. It is magical, it is beyond sentimental, it is the small and lovely feeling of girlhood in summer.

Tomorrow: sleepless nights, knighthood, and the return of the repeat button

I have the inkling that song has the power to connect us in a way that feels beyond human. Like maybe we are deeply connected to each other, and not just in a Neil Degrasse Tyson “we’re all made of stardust” kind of way.

I love a song that will make me cry, without fail.

I love a song that just INSISTS upon repetition. One hearing is never enough, and neither is five or ten or even fifty.

British singer-songwriter Kate Bush’s (OBE) debut album, The Kick Inside, dropped in 1978 when she was a mere 19 years old (even though she had been signed to record label EMI two years earlier). The first single is the strange and beautiful art pop gem, “Wuthering Heights,” which I now lovingly present to you, dear SOTD audience:

I love that the text exists in the literal storybook land of Emily Brontë’s Heathcliff and Cathy, a pop song plopped squarely in my eleventh-grade British Literature class.

I love this woman’s MOVES—like her voice, they’re uniquely Kate. I cannot get enough of the strangely beautiful way woman uses her body. I would be lying if I said I had not, on multiple occasions, attempted to replicate this music video both by myself and in the company of friends. If, dear reader, you find yourself alone and in a certain type of experimental mood, I strongly encourage you to consider doing the same. Right now. Because it’s Monday, and you might need some Kate Bush dancing in your life (hint: you always do).

I love that this song is irrestitably repeatable—I dare you to listen to it just once.

I remember meeting Justine Aronson in a cafe in midtown and immediately inviting her to a party at my house that night. She’s just that kind of person. Turns out she’s a great singer too, and will sing half our show with NYFOS.

I really adore this little John Cage song, “The Wonderful Widow of Eighteen Springs.” It’s a setting of Joyce’s Ulysses and goes against every kind of traditional text setting I can think of -— it sort of deals with Joyce words but not really, it’s just cycles through the same pitches over and over again. And yet it works — the almost Virgil Thomson-like plainness of the music lets me soak up the text and the inherent musicality in the words (I was once told if you don’t understand Joyce, read it aloud).