Something has been missing for me from the last few Caramoor residencies: one-on-one time with each singer, the kind of interaction where mountains get moved and new artistic ideas get planted. It’s mostly been a question of scheduling: when we have a guest coach, the singers are all in one room with Michael and me and the imported guru, and we simply have less one-on-one time. And this week we’ve had guest teachers every day. Until today. I determined to seize the opportunity for quality time with Ben and Christine, and it turned out to be extremely valuable. Singers share truths (and fears) when they’re alone with you that they would never say in a group, and my sensitivities are also sharper and more specific when I am in that intimate teaching environment. The more people there are in a room, the more generalized my responses get. Too much metal confuses my magnet. 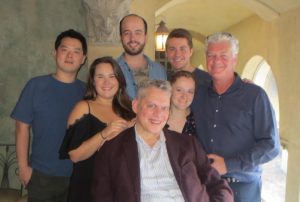 So it was a relief to be semi-alone for a spell with Ben Dickerson and Christine Price (whom I always call “Miss Price,” followed by the breathless declaration “I have ALL your CDs”). Semi-alone because we had some visitors sitting in the back of the room during our sessions, and Eileen Schwab was in Row A. Eileen is the primary sponsor of our program, which is named after her late husband Terrance—she is a hugely sensitive and intelligent woman whom Michael and I hold close to our hearts. And of course Ho Jae was with us too. But somehow I finally felt able to address a couple of delicate vocal and musical issues that required relative privacy. It’s better to be, or at least feel, unobserved when you have one of those “you keep doing this but I want you to do that instead” conversations. Often the the “this” and “that” are either delicate, intangible things or some vocal bad habit that is rearing its head once more, easy to identify but hard to change.

I am happy to say that we did some strong work and that both of them sang with a new kind of abandon in the afternoon. The other person who had a big breakthrough was Hannah, who has been a little tentative in her two big showpieces all week. The second of these is a Cuban zarzuela aria, a real barn-burner with a take-no-hostages climax.  Ho Jae was playing it beautifully (that guy can make a piano sing) but he didn’t quite understand the timing of the final phrases, which require some unmarked tempo changes. He was following Hannah’s every gesture, but unfortunately she was schlepping where the music needs to move, rushing through a crucial fermata, and making the high note at the end much harder than it needed to be.

Now, I know a thing or two about romantic and Verismo-era vocal music—I grew up listening to it. I don’t understand Stockhausen, and all twelve-tone music sounds pretty much the same to me, and minimalism puts me into a deep sleep. But give me a blood-and-guts mezzo aria with a high A at the end and I am like a terrier after a rat. First I burst out singing it to Hannah with the timing and inflection I wanted. (“Singing” is a kind description of the noises I was making.) Then I asked Ho Jae to relinquish the keyboard and I shocked myself by attacking the piano like a hungry matron at a bar mitzvah buffet. I dove into a tremolo, and once again Hannah plunged into her phrase early, and of course, I shrieked “NO, NO, NO, WAIT!” and then I gestured her in, belting out the climax with her. “Not ‘por él sabréeeeeeeee morir,’ but ‘por él sabré AHHHHHHHHHHHH morir!’”  “Oh, can I change the vowel like that?” said Hannah. “YOU HAVE TO CHANGE THE VOWEL! YOU CAN’T SING A HIGH NOTE ON A SQUEEZED VOWEL!” You see, this type of music brings out one of my personas that very few people get to see: the screaming maestro, which is only a few steps away from another one: the imperious opera queen.

It seemed to be exactly what Hannah needed. She was singing at full tilt, knockin’ out the final phrases of the aria over and over again. They sounded great, she was acting up a storm and carrying on. Fabulosity flowed. After we got done, I was showing Ho Jae a few things about how I wanted him to play the piece and Hannah gave us two more fortissimo high A’s. I knew she was a feisty powerhouse when she auditioned for me. How great to see her trust that wild energy in rehearsal!

Oh yeah…Jack did some great stuff today too…but I’ll tell you about that tomorrow. 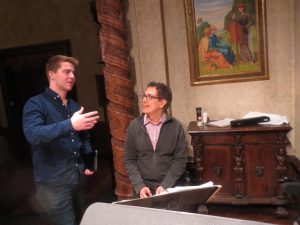