One of the luxuries of the Vocal Rising Stars program is that I am encouraged to invite guest teachers in to work with the cast. But it wasn’t easy to locate the right people for this crazy multilingual program. In fact, I wasn’t even sure what I needed—should it be another musician, a director, an actor, a language coach? Early in February I had a few wonderful prospects on the hook, but they got other gigs and had to bow out. And then I remembered a very moving conversation I recently had with Bénédicte Jourdois in the Juilliard lobby. She is one of our French coaches at school, and she also works at lots of other places including the Met. I remembered that Paul Appleby held a special place in his heart for Bénédicte. Earning Paul’s respect is no light thing, and I also knew that the students at Juilliard adored working with her. I hesitated for about a day because we only had five French songs on the playlist…so would this be the best use of our time….? Then I remembered how eager I was to work with her and I thought: if she’s available, grab her for a session early in the week.

I knew Béné was a good person and a good coach. I just didn’t realize quite how good. First of all, she exudes enthusiasm and receptivity of a high order. Michael and I were treated to a healthy dose of this in the car ride up to Caramoor, and then we got some more Béné-charm in our non-French-rep morning session. She listened to German, Spanish, and American songs as if she were being presented with a four-star meal (and had some valuable things to say as well). I had no idea Béné was a Sondheim fan. What a treat to present her with two songs by him that she’d never heard before. 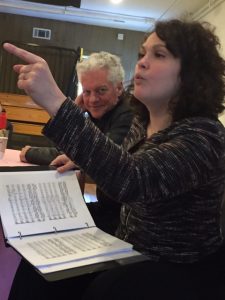 But when it came time to work on the French material Bénédicte sprang into action with a kind of joyous intensity I have seen in very few colleagues. Of course she corrected mistakes and imprecisions of pronunciation, something she does with amazing efficiency and clarity. But she also took us through the poems in some detail, explaining the nuances, examining the images, creating the atmosphere, embracing the romance. Most French diction teachers are obsessed with the vowels, which I admit are complex and subject to rigorous rules. But Béné is just as involved with the consonants, the way they propel you into the word and give the song its juice. I found that she strongly advocated some ideas I’d developed about French diction that I had worried were a bit outré. It’s not a foggy, misty string of vowels. It’s an energized, passionate language powered by sexy, liquid consonants. The real trick is to keep the vocal accent away from the downbeat—to caress the unaccented off-beat notes, what the French call the “accent d’insistance.” She was (appropriately enough) insistent about this idea all afternoon, and I was glad to be her cheerleader.

Bénédicte never played the songs, nor did she coach the music per se. Nothing explicit about tempo or balance or phrasing. And yet when the cast sang the pieces after she worked with them, the music was transformed. A Chausson duet that had seemed shapeless and earthbound was suddenly liquid gold—exalted and flowing. I felt it myself—I’d been struggling to get the damn song off the ground but it refused to do anything but waddle in mud. Suddenly Gina, Devony, and I were flying.

The real eye-opener was the work Béné did on that recalcitrant Fauré quartet. The first run was competent but somewhat clumsy, like four people without a common language trying to solve an equation. After Bénédicte took us through the poem—even with an interpretation I didn’t quite agree with—the cast sang it again. Suddenly they sounded as if Sir Simon Rattle had walked in and conducted them through it. Elegant lines swooped and dovetailed, the whole thing danced. I had grimly anticipated a long, damp session tomorrow in which we went through it section by section, beating the piece into submission until it sounded graceful. But Bénédicte’s poetic analysis and sheer force of personality brought out everyone’s natural musicianship. Magic.

I sensed that something important was going on, palpable but a little elusive. I was trying to wrap my mind around what was happening, and so was Gina. She suddenly stopped dead in her tracks and said, “Oh, I am having a breakthrough moment…it’s all comes from the poetry…sorry, I can’t really find words for it right now.”  I think she was a bit overwhelmed and more than a bit exhausted from two long work days. I hope she’ll explain it tomorrow. I too learned something today about my profession, and I hope I can put words on it tomorrow. 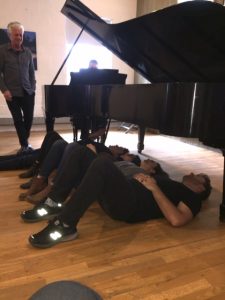 There was another magic moment today. We have a tradition that started in our third season, when our singers were having trouble hearing the piano in a Blitzstein quartet. I casually commented that the best place to hear the piano was on the floor right underneath the sounding board. Michael said, “Oh, great idea, why doesn’t everyone lie down under the piano, and we’ll do the piece again.” It was a success, and now we always have an under-the-piano moment during the week. Mikey brought it up today, saying we might do it on Thursday. But the cast said, “Why wait?” We were doing a difficult a cappella piece, “Eco” by a Spanish composer named Oltra, and there was a section that was not quite jelling. The four of them positioned themselves under the Steinway and started to sing. Suddenly the blend was heavenly, the fall-apart moment was tight, and time stopped. One of these years we’re actually going to perform a piece with everyone lying under the piano. Who knows, maybe this year?

Be inspired to your own breakthroughs at Love at the Crossroads
Sun, Mar 17 at 3pm at Caramoor (Katonah, NY) or Tue, Mar 19 at 8pm at Merkin Hall (NYC)