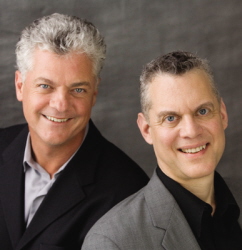 As part of NYFOS’s 30th anniversary celebration, our co-founders answer our questions this week on Artist of the Month. Hear them reflect further on our history at the 30th Anniversary Celebration concert at Merkin Concert Hall on April 24.

How did the two of you meet?

SB: In late 1984, I was appearing with Martha Schlamme and Alvin Epstein off-Broadway in A Kurt Weill Cabaret, and I received a very nice review in the New York Post from Clive Barnes, of all people. He called me “excellent.” It remains one of the few actual reviews I’ve ever received for my work at the piano, and it came at the right moment. When I came in brandishing the newspaper, I found that my housemates had invited Paul Lazarus, a director friend of theirs, over for dinner. They made sure Paul heard about my “rave,” which proved to be excellent timing. Paul was working on a concert in honor of Marc Blitzstein’s 80th birthday. It seemed like a big deal: Tully Hall, star-studded cast, high-profile, an appearance by Leonard Bernstein. Paul told me that the music director, Michael Barrett, was looking for a second pianist to help him out with the first half of the program. Michael came down to hear me play Kurt Weill at the Harold Clurman Theater, we went out for a drink afterwards, and…the rest is history.

MB: About that meeting: I thought he was such a sensitive and musically curious person (and what a pianist!)—like me! I had been doing lots of Marc Blitzstein, so we seemed to understand each other musically. That was it for me. I loved him right away.

NYFOS is devoted to ‘song’ and the wide variety of styles that term encompasses. What is special about ‘song’ to you? What is it that keeps you so devoted to this particular art form?

SB: I have always been drawn to intimate musical communion, the concentrated communion of listeners and sounds. Likewise the heat generated by words and music heard in tandem—a lifelong obsession. Rhymes obsess me. Verbal elegance is a kind of religion for me. And obviously the piano-and-voice combination gives me a way to participate in this almost holy transmission of music and words to a listening audience.

MB: Words are equally important to me which I think I have gravitated to more strongly over the years. I’m usually the guy who insists on the cleanest diction possible from our cast, because I admire the beauty and brilliance of the texts, and want the audience to get it immediately, not from the printed texts. But “No Song Is Safe From Us” came out of a mutual desire to break open the song recital. Once Steve said “Oh the programs will be thematic” we were all set.

How would you describe your partnership?  How do you work together to craft a program?

SB: Michael is the new music guy, the overview guy, the worldly guy; I am the everything-else guy, the detail guy, the archivist. I am obsessive about program order and the dramatic arc of an evening. I literally wake up at four in the morning with ideas, or terrors, about upcoming concerts. Just last night I was dreaming about the April 24 playlist.

MB: Too true. We do seem to agree on the singers, and we have been fortunate to have worked with so many spectacular artists. We still do.

Looking back on 30 years of NYFOS, which programs or performances most stand out to you?

SB: Schubert/Beatles. Rags to Riches with Stephanie Blythe and Bill Burden. Spanish Gold at Caramoor with Corinne Winters. PROTEST. Art Song on the Couch. Pyotr the Great. Latin Lovers and A Modern Person’s Guide to Hooking Up and Breaking Up at Juilliard. Performers? Don’t get me started. We’ll be here all night.

MB: And I’ll add Spanish Love Songs which we recorded live at Caramoor with Lorraine Hunt Lieberson and Joe Kaiser. We knew it was a special night, and Steven and I had a deep experience with those two amazing singers. That stands out along with the generosity of Bill Sharp, Amy Burton, Chris Trakas, John Musto, Kurt Ollmann, and a dozen others that were with us every year for the first decade or two.

Outside of NYFOS, what musical experiences, onstage or as an audience member, have stayed with you or felt most significant?

SB: My most significant ongoing musical experiences are my hours at Juilliard. I think that learning how to be a good teacher has helped me grow up as a musician and as a human being. I could never have gotten into Juilliard, nor was there a program for collaborative pianists when I was starting out. But I have come to a deeper and deeper understanding of what it means to make music, to interpret a song, and simply to hold your ground in this crazy world. And I have a more profound sense of the process of teaching, and its possibilities. Don’t forget: I never went to music school. So I had a lot to learn.

Hearing  a German Lieder recital with Margaret Price and Graham Johnson in 1985 changed my world. The sheer beauty of her singing, combined with her unfussy, magical expression of the texts, showed me what art song could be: alive, personal, opulent. I’d never truly felt at home with German Lieder before, much as I tried. But with this duo I finally heard that singing Strauss was more like singing Gershwin than I had realized. Hearing—and working briefly with—Elisabeth Schwarzkopf had made it all seem so complicated, a minefield of potential failures, a nexus of shame. Graham and Margaret Price showed me the naturalness of its nuances.

Hearing Joan Morris and Bill Bolcom in 1977 at Tully Hall opened my eyes to the possibilities of sharing the full spectrum of a song with an audience. They are the true godparents of NYFOS.

Playing for Martha Schlamme and Alvin Epstein in their Kurt Weill Cabaret—on- and off-Broadway back in the 70s and early 80s—set a standard for physical acting, spontaneity, emotional depth, and for artistic fervor that has been a beacon for me ever since.

MB: Well I had the last decade of Bernstein to absorb, in a rather deep way since I was often his assistant in Vienna, on tour, with the NY Phil, things like that. Those are all indelible, and maybe I’ll have to write it all down one day. But a few stand out: Bernstein’s Mahler 2 at the NY Phil with Jesse Norman, Barbara Hendricks, and the very best night of Mahler. Ever.

Playing in the grotto on the banks of the Colorado River at the Moab Music Festival 30 miles from the nearest road (you take a boat to get there), and sharing the stage with Steve Blier who defies the odds and makes me pay attention to our artists and to the music in the best way.

Both of you work frequently with young singers; what advice do you find yourself giving most frequently to your students?

SB: You have to know the difference between art and technique, and the best use of each. My maxim is: First you work on the song, then the song works on you. What that means is that you have to study the text—musical and verbal—to understand its meaning, its history, its ethos. You have to own it so that you feel you wrote it. And then…you have to release it. Once you know what the character is saying, you have to let your unconscious tell you what the character is not saying. The Three I’s: Information, Inspiration, Intuition.

On a practical level: look everything up. Ask questions. Read.

MB: I don’t think I can give advice, (of course I do) but I can give them performance opportunities, introduce them to composers, invite them to sing at house concerts and hone their social skills with the hoi polloi of New York. I just watch them grow up and kvell with pride. And if I’m lucky, we stay close for many many years.

If you could put any singer of the past in a time machine and bring them here to be in a NYFOS show, whom would you pick? What would you like them to sing?

SB: Besides the ones I mentioned: Victoria de los Angeles, Conchita Supervia, and the young Manuel Ausensi to sing a Catalan program; Lucia Popp and the young Gabriela Benackova for a Slavic concert; Billy Eckstine, Vivienne Segal, and Ethel Waters in…doesn’t matter what. Tebaldi, Simionato and Bergonzi to do our annual gala. Oh—Manuel García and his two daughters, Pauline Viardot and María Malibran, to sing a tribute to themselves.

One singer I would bring back is the wonderful Bruce Adler, our headliner in Lost Tribes of Vaudeville. He contributed so much to that show, and he will be almost impossible to replace.

MB: I like Verdi too, and just heard Un Ballo in Maschera out in California. And Mahler 4.

SB: I am naturally a bit solitary but also quite verbal. And…I live in a wheelchair. So I love crossword puzzles, corresponding (with a weakness for snail-mail), and working on my book. Also, obviously, reading. For exercise, I am a swimmer. Not a great one, but a dogged one.

MB: I run and walk as much as possible. Since Steve can’t use his legs, I make it a point to not take mine for granted. I walk my dog, I hike, I run, I play tennis and I play golf. Play golf with me and you will have made a non-profit donation to one of my causes before the 18th hole.

SB: A tie between “Carinhoso,” by Pixinguinha, and “Ask Me Again,” by George Gershwin.

MB: Impossible! “Bist du Bei Mir” by JS Bach to be sung at my life celebration when I’m gone. And Paul Appleby showed me the great beauty of Schubert’s last song “Die Taubenpost” which I treasure.