Song of the Day: October 16 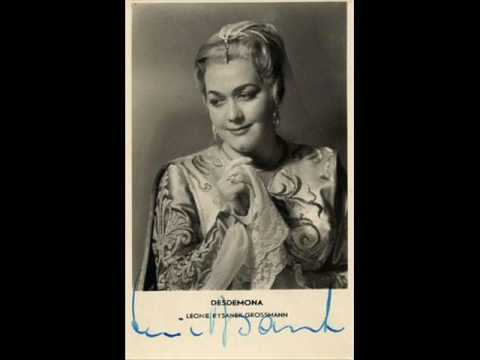 I am still thinking about my strangely empty evening hearing Otello. It has become a habit of mine to listen to recordings of a work after I see it in the theater, and this morning I sampled Solti with Margaret Price and Carlo Cossutta, Levine with Scotto and Domingo—wonderful, familiar studio recordings. Then I ventured into the Wild West of opera, YouTube, where I found a few excerpts from the 1964 Met broadcast of Otello with Leonie Rysanek and James McCracken. I clicked on the Act III duet excerpt and experienced the kind of passion and commitment that keeps me tied into this art form. In Rysanek’s singing I hear a combination of command and abandon, hysteria and control, myth and humanity. She came from Vienna, and in her operatic portrayals she was able to evoke Freud’s archetypes and make them into living, breathing women. Her Desdemona shook me up. It is so passionate, so uninhibited that I literally burst into tears after the death scene. Rysanek really fights for her life, and her murder is violent—she doesn’t go quietly. Isn’t it odd that a monophonic broadcast excerpt, played over my iPhone, had a more powerful emotional effect on me that an entire night hearing the Verdi opera in the theater?

I first heard Rysanek in 1964 at the old Met, as Senta in The Flying Dutchman. At age 12 I had never seen anything like the kind of ecstatic trance state she entered as she sang Wagner’s music, and 51 years later I still haven’t seen its equal. I last saw her at her Met farewell in The Queen of Spades. I was lucky enough to hear her curtain speech thanking the New York public for their long embrace (when I also burst into tears). I was even luckier to get an invitation to the gala dinner afterwards—Peter Kazaras, who’d been in the cast, took me as his date. I got on the long line of well-wishers to greet Rysanek and tell her how much her art had meant to me. When we met, I recalled that performance of Dutchman and told her that she had fed my desire to become a musician. She was lovely to me, but I knew she had many people to greet that night and I was a total stranger, one of a throng of admirers. I left her to her public, enjoyed my dinner, and eventually headed out towards the exit. As I passed her table, Leonie Rysanek crooked her finger at me and beckoned me over. I hesitated and looked around—could she mean me?—but finally approached her. She looked at me, took my face in her hands, and kissed me. Not a word, just a kiss.

I did not know that she had terminal bone cancer—she’d told no one. Two years later, she was dead.

There is a post-scriptum to this story. I appeared in Vienna with Renée Fleming in the year 2000, to date my only concert in Freud’s stomping ground. The Viennese public is famous for giving you the stoniest possible “game face” during a recital; they look as if they are all waiting to get colonoscopies. I didn’t expect them to like my way of making music, but I’d be on a plane the next day and I just wanted to get out alive. When I came offstage, a man was waiting for me. “You played very beautifully,” he said soberly. “Thank you.” Pause. “Do we…know each other? You look familiar.” Pause. “We met once.” He paused again. “I was Leonie Rysanek’s husband.” We took a moment to look deeply at one another and shake hands, but no words came to me besides a stammered, “Thank you.” And then he was gone.

Thanks to Ken Benson for bringing these YouTube clips to my attention.