Song of the Day: October 13 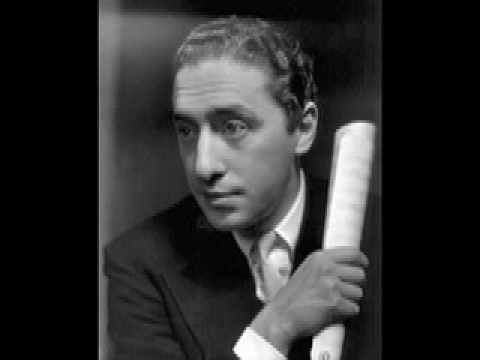 As I work on the NYFOS@Juilliard show, “Harry, Hoagy, and Harold,” I have been falling in love all over again with their music. I’m at the anguish point of my programming where the selection of any given song means the omission of another. I peruse anthologies and rifle through my boxes of material at home and go into a tailspin, that old black magic of song-love. The cast is experiencing the same thing, minus the anguish. They love everything, aren’t attached yet to one outcome or another, and are confident that somehow I shall tidy up the musical sandbox after we’re done playing. But I have noticed that many of them are starting to lobby for Arlen songs.

I am grateful that Arlen recorded some of his own music. His performances take a lot of liberties with the printed texts, peppered as they are with altered notes, rewritten melodies, and sometimes different lyrics. He didn’t have a conventionally pretty voice, but he had the power and improvisational skills of a Jewish cantor. No mystery there: Arlen inherited his musical talent from his father. who was the cantor for the Pine Street Synagogue in Buffalo. After his son become successful, old Sam Arluck liked to insert snatches of his kid’s famous songs into the prayers. If you listened closely on Saturday, you would hear him sneak a bit of “Over the Rainbow” or “Stormy Weather” into the Kedushah or some wild nigun.

Arlen had an ace up his sleeve: on Saturdays he went to his father’s shul, but on Sundays he went to the nearby Baptist church and heard the sounds of gospel. Synthesizing these two musical cultures, he created an oeuvre of breathtaking songs that wail, swing, soar, bounce, and seduce. Here’s a favorite: “Buds Won’t Bud,” sung by the Master himself.