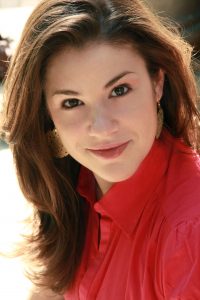 Artist of the Month rings in 2018 with mezzo-soprano Rebecca Jo Loeb. Hailed as “a theatrical performer whose rise to watch” (Opera News), Ms. Loeb is based in Germany and sings throughout Europe and in the US. She recently made a “notable Met debut” (New York Times) as Flora in La Traviata at the Metropoitan Opera. A NYFOS Emerging Artist program alum, who has performed in our Mainstage and gala evenings, Ms. Loeb will return to NYFOS at the end of the month in our tour programs celebrating Leonard Bernstein.

You are an American singer who is now based in Germany. How has this affected your career? How have you adjusted to being an ex-patriot?  Do you feel this is likely to be your permanent home base or do you expect to return to the States at some point?

Unbeknownst to me at the time, beginning my career in Germany was one of the best things I could have done. The transition from Young Artist directly out of school or Young Artist Program remains curiously vague to most. No one talks about it. Either you’re swept up by a manager and slathered in opportunities or you somehow, and often for no particular reason, fall flat. Moving to Germany I managed to get a fest job at the Hamburg State Opera quite quickly where I built my stagecraft, my ability to prepare quickly, and technique to sing in larger spaces. Within four years I had more roles than most young signers would dream of under their belt, and thankfully out of the eye of major reviewers. Luckily I managed to keep my contacts in America fairly strong and so every season came back to the US for at least a few concerts. To be honest, I love Germany and my home in Berlin… And especially in this political climate I plan on staying here. My dream is to call both countries my home.

You are known for your acting as well as your singing. Can you outline how you approach this when working on new rep?

I probably couldn’t have answered this question a year or two ago, but last summer I taught at an opera program in Berlin and focused primarily on “How to prepare an aria theatrically” and in doing so really laid out what I tended to do naturally. In school for Opera we’re not really given the tools for how to prepare things theatrically. We take acting  (but we essentially do scenes and mologues which are another beast entirely) and then are thrown into some sort of opera studio where a teacher critiques our arias to make them better. But no one ever tells us from the get go how to prepare them theatrically in the first place!

So of course I need to translate, know the text well (now that I speak Italian, French and German this helps) and the situation. Then I ask myself where does the aria begin and where does it end? As in, where do I start emotionally and where do I end emotionally. I can’t begin and end in the same place and make the aria compelling, I believe. Then I ask what do I want? Or, in other words, why do I sing the aria? I always told my students, “expressing yourself” is not an option. Maybe I want to convince someone of something, I want to change my fate, I want to discover what to do, etc. Then I separate each section of the aria into actions (one to three words ideally) of how I get that goal. Pleading, begging, flirting, threatening. Then I decide who I’m talking to. Where I am. Etc. Etc. If I lose focus in the aria it means my choice wasn’t interesting enough. If there’s a passage where I need to think about technique, I pick an action that helps me do that without looking like I popped out of character.

When I’m in an opera it’s naturally much easier. All those things are laid out for you. There the hardest bit is making sure you know what everyone ELSE is saying so you stay honest and continually trying to stay as IN THE MOMENT as possible.

You’ve had some family emergencies and difficult losses during your career. How have you managed performing throughout painful times?

I don’t think it’s easy for anyone in any profession to go through hard times. That being said, as a performer you ideally bring your soul to the table each time you get on stage, and that naturally complicates things. I think the most difficult thing for me was handling my stress. Grief, I once read, keeps odd hours. Not only that, I’d add that it sits dormant inside you even when it’s not actively expressing itself. Performing also heightens ones emotions, stress, and anxiety. The emotional (and physical) difficulties I went through manifested themselves in me as a heightened state of anxiety and feeling , even when I felt supposedly normal. So add the even minor stress of performing and my cup boiled over. Every time. One solution I found was that I actually had to make myself cry before a performance. I had to let some of that latent emotion out in order to have some sort of homeostasis before performing. Worked quite well, actually. And although it was and is difficult,  it gave me some interesting insight into how we as humans process emotion.

Right now I’m really excited about the show LOVE LIFE that I’m doing in Freiburg, Germany. It’s one of Kurt Weill’s lesser known works and it’s the first proper musical I’ve done in a long while. The part is very well rounded vocally, emotionally, and physically. I get to dance, sing, do hilarious scenes and wear a myriad of fabulous costumes. After normally playing the side character, countless maids, and countless boys, it’s fun to be a leading lady again!

Currently I’m listening to a lot of folk music. I recently picked up guitar again (I used to play a bit of classical guitar) and I’ve been relearning old tunes, learning new ones, and arranging some of my own. I’m really into Eva Cassidy, Bob Dylan, and Nick Drake at the moment. Moving forward I wanna bring some more Blues tunes into my repertoire…working right now on a Jazz/Blues verison of GEORGIA ON MY MIND.

When I was in school I sang a LOT of song. We all did. Then after I left school it was basically opera, opera, opera. And because we’re currently in the age of the director (especially in Europe) and there’s sadly just never enough time to rehearse musically you often end up just kind of “making it work”. We make tons of plans with the conductor but once you’re on stage tempos are different, the space makes you often sing differently, and you have staging to worry about, and often the conductor is so (understandably) worried about the orchestra that you end up just making it work. I personally have had fewer truly collaborative moments in performance in opera than I’d like.

In song, however, what you do in rehearsal is more or less the same as what you do on stage. Maybe you have different acoustics to deal with, but that’s about it. You can make magic in the rehearsal and then bring that directly to the stage. A few years ago I did the WIGMORE HALL competition with a wonderful collaborator and friend who I know from MSM and Juilliard. She had been busy for years coaching singers for musicals and auditions and I had been busy in opera. We had so much freakin fun planning a program, rehearsing (in three different countries no less!) and finally bringing it to life on stage. Although we didn’t make it to the finals we did make it to London and then through the next two rounds. Before we went to London, however, we got to perform all of the songs at my apartment in Berlin for a group of friends. It was a real salon moment. And by the end of our three rounds of repertoire we had many of our friends in tears. We had made something magical because we both had created it ourselves from the ground up. You really can’t get that exact feeling in opera.

What is your favorite song? (The Impossible Question)

One of my favorite songs is Ravel’s “Kaddisch”. The text is, naturally, the text of the Mourner’s Kaddisch in Hebrew. Ravel’s setting of the song, I think is just sheer perfection. Additionally, this song has followed me for many years. I learned it in undergrad, but didn’t have the technical facility to really sing it properly. I sang it on my graduate recital at Manhattan School of Music where my mother heard that setting for the first time and it moved her deeply. Many years later, after she died and we were planning the program of her memorial service, my mother’s good friend, who is also a cantor and was to lead the service, asked me if I wanted to recite the Mourners Kaddisch. I remember the idea popped into my head to sing the Ravel; my mom had loved it so much. I said I would wing it and if I wasn’t a blubbering mess then I’d sing it a cappella. Well, I was a blubbering mess. But somehow at that moment a strange calm came over me. I knew I just had to sing it. Funny how important moments like that seem to just happen, as if they always were so. Later my mom’s friend, who had planned the service with my mother before she died, told me that my mom had actually requested that I sing that song, but hadn’t asked because she thought it might be too much. That was a pretty special moment.

What is your ultimate goal as a singer?

I know many singers dream to sing at a certain opera house or to sing a certain role. My goal is a little more internal. I just want to be proud of what I do. Like many artists I’m never satisfied with what I do. Very rarely do I leave the stage and think WOW, THAT WAS GREAT. In some ways this is good – keeps me moving forward. But on the other hand, never being satisfied really sucks! So lately I’ve been giving myself mini goals: One phrase that I’m working on; calm the voice in my head while I sing; stay in character 60 percent of the time. I focus on this one goal during THAT performance THAT day… and if I do that, then I’m satisfied. Maybe if that starts becoming easier then I’ll be able to let those little micro goals go and just learn to be satisfied with what I’ve done. I’d like to sing a performance, know objectively that there is more to work on and yet STILL say, “You done good, Becca.”