It never ceases to amaze me how significant a concert can be, especially in an intimate environment away from the urban hurly-burly. When we make music in Orient—way out at the eastern end of Long Island’s North Forth—we feel the immediate reward of feeding people who are clearly hungry for song, hungry for artistic stimulation, hungry to be addressed with kindness, humor, and intelligence. Almost every time we musicians face the public, we feel we are auditioning. This gig could lead to the next gig if Person X thinks we did well. This gig could also dampen our chances of the next gig if Person X doesn’t go for us—for any reason, including our shoes. For two blessed hours yesterday, we offered our songs with a freedom that is unique in our lives. And the sold-out house went crazy for the concert.

I have had a few insights over the last couple of days. At dress rehearsal, we hosted a couple whom I have known very slightly for a number of years. They live on the street where the hall is located, so I run into them and make polite conversation six or seven times each summer. She has never been able to attend our concerts because she has to leave for New York in the late afternoon on Sunday. As a kindness (and to ease us into performance mode) I invited her to the dress rehearsal. She and her husband were our only listeners—a command performance. The cast and I did our thing, and at intermission she was in a state of rapture. “Oh, Steve! They’re…wonderful! I mean, these singers…oh lord, I had no idea! This is…amazing!” “You’ll stay to the end, then?” “Are you kidding? Of COURSE!” After the encore, still more euphoric enthusiasm. “Oh Steve, we can’t thank you enough.”

I wasn’t surprised that she and her hubby enjoyed the music. I was surprised that they were surprised by the high level of sophistication we offered them—vocal, programmatic, theatrical. It was all news to them. My wheels started turning.

At the performance we play to many people who have come to hear the NYFOS@North Fork show year after year—“It’s the highlight of our summer!”—but there are always first-timers. Among them was the nephew of some close friends, along with his girlfriend. Being something of a senior myself, I am not judgmental about playing to older audiences. After all, we elders grew up going to hear music in a pre-cell phone, pre-Instagram era and we know how to listen, absorb, and appreciate unamplified music. But I admit that it’s gratifying to have at least a few twenty-somethings in the crowd, and I’d welcome a passel more of them.

At intermission, my friend (the young man’s aunt) came up to me. “My nephew is LOVING it.” “Oh, how nice.” “You know what he said?” “Um, no…” “He couldn’t believe how much he and his girlfriend were enjoying it.” “You mean…he thought he was being led to the slaughter?” “Well, I think he assumed he’d be bored and restless.” “Ah! How nice! Another satisfied customer.”

Getting that reaction two days in a row has made me think a lot about building audiences these days. Unless you know from experience that you’re likely to hear something memorable, there seems to be an assumption that (1) a song recital is about as dreary as a gluten-free cracker, and (2) “young artists” means fledgling amateurs who will need a lot of patience from the audience. How can you convey that Johnathan is knockin’ ‘em dead in opera companies on two continents, that Amanda is about to sing a Bernstein concert at Carnegie Hall, that Philippe just received raves in Opera News for his performance in “La Cenerentola,” or that Maria simply has one of the most free and colorful soprano voices they’re ever likely to hear? Or that a playlist where the only two composers you know are Leonard Bernstein and the Kinks could transport and heal your spirit?

I have friends in town who conveniently duck the annual recital for those exact reasons. Yes, it pisses me off. A lot. But it points to a larger issue: how do you preview a performance so that people give you their time and their ticket money?

I’ve been discussing this with a new board member, a brilliant young man named Philip Kalikman. Social media (duh) seems to be the answer. If everyone is indeed glued to Instagram and The Book Of Face, that’s where you have to go. “And you need promotional videos.” “About how long? Like, two and a half minutes?” Pause. “No, Steve. No one in my generation—” I winced. I hate that “generation stuff” when it’s turned against me. He continued—“will look at anything longer than forty-five seconds.” “WHAT CAN YOU SHOW IN FORTY-FIVE SECONDS?” “Plenty. Enough. A good videographer will know what to do.”

I am sure Philip is right. I’ve watched a ton of 45-second videos and I find them extremely frustrating, but also tantalizing—and, wanting more, I buy a ticket.

As far as the show went yesterday: everyone was in superb voice and the work we did all week flowered in a very satisfying way. Tenoch and I nailed our Debussy duet, and my solo piece (Rob Schwimmer’s “Holding You in My Arms”) came in for a smooth landing. After the last song, David Krane’s arrangement of “How Can I Keep From Singing,” I literally heard people weeping. I too was moved—more than I realized. To introduce the encore, I started by thanking the cast. “I’m grateful to these four artists.” I searched for words. “You just don’t hear beauty like that every day.” Someone in the audience actually said “Amen,” and there was a round of applause. Lucky, because I too was suddenly choked up with tears. 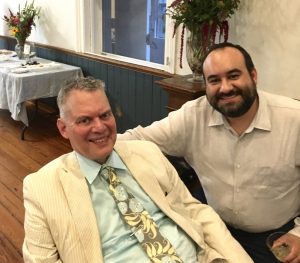 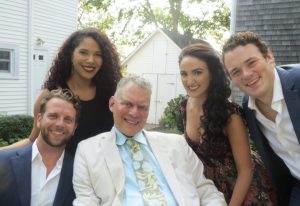