When I planned “Red, White, and Blues” I thought I was making a light summer entertainment: 10 French songs, 10 American songs, encore, done. A pitcher of musical sangria. Then I started working on the program, and got a little carried way with visions of sugarplums. “Wouldn’t it be great to do the aria from Mme Chrysanthème? Gosh, this is the time everyone needs to hear ‘Awaiting You’! Oh, we’re by the water, we should do ‘J’attends un navire’!” The result is that my light repast is more like a five-course meal catered by Lutèce.

This became clear to me when we did our first run of the concert yesterday. Blockbuster number follows blockbuster number. The good news is that Mikaela, Sam, and Bobby are blockbuster types—I actually knew what I was doing. Even though they said they were a little tired, they came through like champs. Mikaela did her emergency brake thing a few times, which always gives me a moment of artistic whiplash. Bobby did a reluctant samba during “Zumba,” after which I was able to relieve him of any actual dancing duties during the concert (I just needed to get him out of park-and-bark mode). The look of relief on his face was a highlight of the week. And Sam is locating the delicate filament of artistic light residing within him. Everything was great except the beginning of Adam Guettel’s “Awaiting You,” so I resorted something I rarely do: I sang it to him the way I thought it should go. I have the voice of an old diva: fragile but hugely expressive. Sam was clever enough to pick up from my scratchy rendition what I wanted, and instantly located the style of the song. (I think that was Jim’s favorite moment—he was taking pictures.) 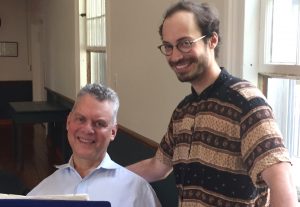 As for me…well, these North Fork weeks aren’t too easy. I don’t have time to practice and I start to play like a rehearsal pianist, with the full knowledge that at some point I will need to create some beauty of my own. The piano is in a little better shape than last year but it is not an instrument to inspire elegance. Every concert program has about seven spots that my hands don’t like—and I was relieved to learn that this is a common thing among pianists. Three goober-moments can be covered with short cuts that no one will ever know about, though I always feel horribly guilty. (But a famous virtuoso pianist once told me, “Everyone leaves out a note or two, it’s standard practice.”) The other four spots really need some woodshedding, and that is not an option out here. No time. And of course, they are all I think about when I get up to play.

My private agonies are offset by the beauties of Orient and my three young colleagues. Trump is pardoning Joe Arpaio, Venezuela is collapsing, Texas is being pummeled by rain and wind. But out on the east end we have cool, clear weather without a cloud in the sky. My summer house is populated by a group of people I love. And at the intermission break yesterday, we had a blessèd event: our producer, Priscilla Bull, turned up with a homemade pie. “Maine blueberry,” she announced. “So you don’t have to buy pie at the store for eight dollars a slice.”

Now, I don’t eat sugar. I don’t eat wheat. I don’t eat dessert. However, it seems that I eat pie. And this one was sensational. Mikaela cut me a small piece and I wolfed it down as if I had been starving in the wilderness. I sinned again after supper when I brought the pie home to my summer house family. I’m repenting today. But I’m not actually sorry.