Orient doesn’t have much of a business district. There’s a post office and a general store. One art gallery. And…a pie shop. We were given a gift certificate there, a Brooklyn outfit called 4 and 20 Blackbirds. I don’t eat pie, but everybody else does. Johnathan McCullough is a gifted photographer, and he captured the essence of the place: 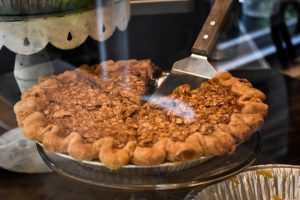 Down the road we have a restaurant called Orient By The Sea. If you know what to order—and that would mean tuna or lobster—you can have a very satisfying, no-frills meal. Even at peak season with a farm stand half a mile away, they are not big on vegetables or side dishes. What they do have is a view of the harbor that encapsulates everything you love about the summer. You’ll carry that sense memory with you all year long. Here’s the gang, photographed by the woman at the next table. My blue-and-white hat is getting quite a workout this season—it’s making its stage debut tomorrow in “Humphrey Bogart.” I doubt Bogie would have worn something so foofy, but any port in a storm. The smiles in this picture are the real deal. 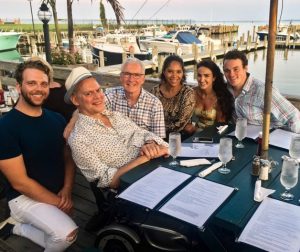 As far as the music goes, we’re making good progress. I’ve taught Maria, an amazingly talented young woman, how to be kittenish. She has a propensity to veer into dark tragedy. It’s her auto-pilot setting. I feel as if I am photoshopping her songs and adding “Brilliance,” which she has in abundance. And I am surprised by how much I know about being kittenish. (This shot is by Johnathan.) 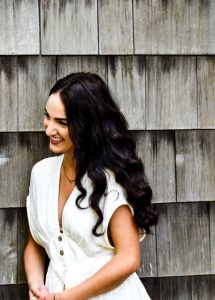 Philippe is learning how to stop time when he sings, finding his true eloquence. It’s so moving to watch him emerge as an artist. I described this later to my housemates, who are not musicians. Most of them just went on eating their salads, but one of them (Charles McKinney) pursued the subject. “Now, how does he manifest that?” “Well, actually, with his VOICE. With his words. With his timing. With his timbre With his being.” Charles, like everyone else with whom I share my summer house, is more visually oriented than aurally. Since he is the man who photographs the concert (and done it superbly), he is keenly aware of how previous casts have handled themselves physically, often giving me notes on how the artists look when they are singing. So I added, “Charles, I am not 100% sure you’ll be able to capture the magic in a picture…but it’ll be in his sound, it’ll be in the room.” Actually, I think Charles is going to get some stunning shots of Philippe. (Johnathan did.) 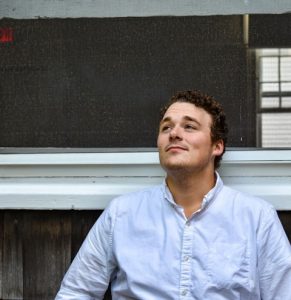 Amanda’s voice has become something I crave on a daily basis. It’s a mysterious sound—colorful but not heavy, room-filling but not edgy, emotional but not pressured. Its beauty is unique, which will ultimately make her invaluable in the operatic world. It’s tricky: those folks claim to want one-of-a-kind voices, but they are comforted by hearing singers who remind them of other singers. That makes it easy to categorize and cast them. Amanda’s timbre is exotic, flexible, and soulful. I cannot get enough of it. What a gift to hear her sing Eduardo Toldrà and Michael John LaChiusa and Leonard Bernstein. (Johnathan’s picture again.) 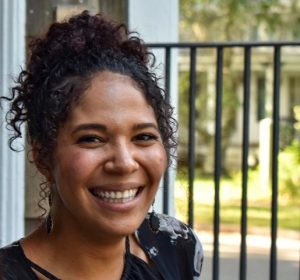 As for Johnathan, he’s been a rock of support all week. He’s mastered the art of what Greg Feldmann calls the “Steve-Ho”: lifting me in and out of the wheelchair and getting me to the piano. He is always there when I need him—tea-time, gluten-free cracker time (when others are eating pie), closing up the hall time. I also named him ad hoc stage director/manager, since he’d done the show before. Not only has he done a beautiful job but he has managed not to piss anyone else off. (This is a very harmonious group, thank God.) All of this is icing on the cake. The cake itself? His performance. I love the way Johnathan rehearses. He always gives a connected, engaged performance, he’s always developing the music and the character, he’s always THERE. His voice doesn’t seem to have any limits, and he’s got as much imagination as any singer I’ve ever worked with (a very high bar). It came out yesterday that Johnathan didn’t know some rather basic things about making a document on the computer. “I never write. I haven’t written anything since high school. I’ve been in operas all that time.” It came as a shock—how could someone so articulate and finely tuned not know about “Search and Replace” on a Word program? Mysteries, mysteries. 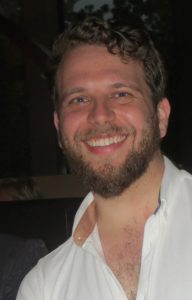 As for me, I once again had a lopsided day, beginning decently and ending with the Three Stooges attached to my wrists. At least Mo, Larry, and Curly were having a less clumsy day than the one before. I guess I’ll know if I can nail the end of the show when I only have to play everything once—at the performance.