But when I first sat down to play it, I had the oddest sensation of déjà-vu. In fact, I felt as if I were seeing a ghost.

This turned out not to be one of those quirks of brain chemistry, the effect of some errant gas in a cerebral nerve ending. You see, this faded, once-black Mason and Hamlin baby grand was the same instrument I grew up playing. The giveaway was the music-rack: square corners, matte finish, unmistakable. Same vintage, same size, and same timbre. I played it, and suddenly I was five years old again.

Our Mason and Hamlin had belonged to my grandparents. Like the one in Poquatuck, its wood had gotten bleached out by being placed in the sun. Ours had another quirk: the key slip, the piece of wood on the front lip where the white keys descend, was loose and had a habit of edging forward and adhering to them as I played. Being a child, I adapted. I became adept at pulling the key-slip back quickly to unstick the keys while rattling through Schumann’s “The Merry Farmer” or Mozart’s “Ronda alla Turca.” The vagaries of my childhood piano set the course for a lifetime of bizarre technical quirks.

Coming back to the same make and model I played as a kid is a very strange homecoming. Due to some strange acoustical property of the room, I can’t quite hear myself when I am playing—until I biff a note or spazz out on a phrase or lose control of a transposition. Those I hear in Technicolor vividness. The hammers have seen better days and don’t like being played too forcefully. The action of the piano is decent until you get down to very soft dynamics, at which point the notes don’t always sound. This can make an easy song into a mine-field of clunks and unwanted silences.

Like women after the rigors of childbirth, I tend to repress the memories of my struggle with this Mason and Hamlin the minute I am done with the annual concert. But this week I am going through the psychodrama of confronting the instrument that got me hooked on playing the piano. It feels like meeting the guy who gave you the gateway drug, sealing your fate as an addict for life.

Things took a turn for the better yesterday. Unlike the singers, who can practice all morning, run lines while floating in the bay, and review choreography on the beach, I don’t really have a way to put a bandage on the inevitable spots that come undone during a rehearsal week. I literally awaken in the middle of the night going over the knotty measures in my sleep—“fingering my passages in bed,” as the old joke goes. So I have resorted to a kind of Zen technique, getting hold of the task at hand in my mind before I go to rehearsal, picturing a calm connection between my aural concept and my hands, and inducing a spiritual acceptance of the piano’s limitations. I must say that I played a lot better at our work-through yesterday. Yeah, there were some accidents, but no five-car pileups. Nicks and scratches, everything covered by insurance. 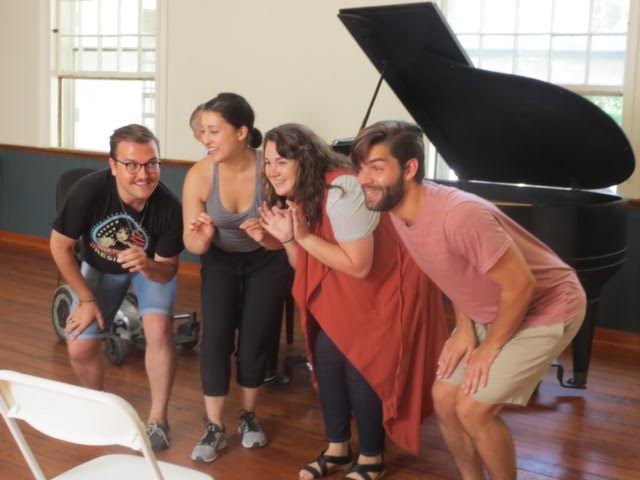 As for the cast, “the weather still continues charming,” to quote The Important of Being Earnest. Miles showed his teeth in a way I had not seen before (wonderful), Kelsey’s emotional command continues to detonate, Alex’s warmth and humanity shine through like a beacon (though I occasionally have to ask for them), and Christine—who said she wasn’t feeling too well—blazed through her songs with radiance and power. We had a few visitors and heard our first applause. A mother brought her four-year old son in just as we were launching into Bernstein’s raucous “A Julia de Burgos.” Christine hit a high C for the ages—but mother and toddler were gone by then. I am sure they could hear her a block away.