Thursday is the last day I can really work on the songs and push the cast to take risks. On Friday our water breaks as we do our first work-through. Reassurance is the name of the game. On Saturday, contractions start as we have our dress rehearsal. We retreat to our corners. And we deliver the baby on Sunday.

So today I had to be firm with the cast. I hate interrupting an artist who is clearly lost in his world of song, giving his all—while, alas, screwing up in some way. I feel as if I am intruding, being bossy, stepping on a tender plant. But I find that my singers this week actually welcome the intrusion. “That’s why I’m here,” said Sam Grosby. “I need to know.”

Bobby Mellon is proving to be a force of nature, a thrilling voice and a geyser of emotional reserves. Our work is mostly about when to let it rip, when to be more objective. (It’s also a mini-seminar in French vowels.) In an effort not to overplay his hand, he can flatten out the big moments—like the second verse of “Le manoir de Rosemonde,” when I told him to go for it. “Lay into that second verse—‘si la course ne te HARASSE!’ “Oh, OK. I was…trying to be a nobleman, like we talked about yesterday.” “A nobleman who is losing his shit! Go.” I am also trying to get him to sell the tango-habanera “Zumba.” “You’re in front of a crowd of 3000 at the Olympia Theater in Paris, and they’ve all come to hear you sing your signature tune so they can tell their grandchildren.” “I am…?” “Yes. So unlock your knees, let your arms go free, and for god’s sake don’t be afraid to shake your booty.” This, by the way, does not seem to be an issue for Sam and Mikaela, who are dancing as they backup Bobby in that song.

My task with Sam is to get him to tap into his natural musicality, and to trust his natural musicianship. He’s a warm, spontaneous guy and a class-A singer, but he has a way of getting academic on me. “Sam, the beginning of your Duparc needs more warmth, more persuasiveness.” “Oh, yeah, I know, but I was saving some of that for the second verse…” “No. NO! Grab the audience from the first line, don’t worry about the second verse. Duparc will give you the ammo for the second verse. Cajole, persuade, seduce from the beginning. If you don’t create the atmosphere in the first three lines, the audience won’t care what you do in the second verse.” We did it again and the piece was transformed, suddenly filled with longing, tenderness, and humanity. “What did you do? What did that feel like?” “I felt as if I were just singing a cabaret song.” “Well, it was stylish and alive, not at all vulgar. You were making music. You into that?” “YES!” His Gershwin was similarly transformed when I told him, “OK, Sam, your character has just had sex three times in two hours, you’re practically liquefied, and you’re waiting for the takeout Thai food to arrive.” Bingo. Languor, humor, and the voice of a guy who has just gotten very, very lucky.

Mikaela doesn’t have problems letting herself go, but there are moments when she isn’t sure what she wants to do or what the song is up to, and things come to a sudden stop. As her partner, it is like going from 85 miles an hour on the open road to a screeching dead halt, as if she spotted a slow-moving animal crossing the road. Her questions are perfectly good ones—like, “How do I sing the last page of ‘J’attends un navire’ without spitting up half my larynx?” or “Should I take an optional high Bb or an optional high D at the end of the Saint-Saëns?” or “I can’t find that G-natural on page 2.” Sam and Bobby keep going even when they make mistakes, sometimes giving a gentle wave, the international singer’s signal for “my bad.” Mikaela pulls the emergency brake.

We had a few listeners today, people from the town who have been involved with producing the concert. All of them were blown away by the singing they heard, and with good reason. I decided to pull one of them in to help Bobby with his Kurt Weill song, “Complainte de la Seine,” whose lyric is a long list of all the things at the bottom of the river. Some of them are beautiful, many of them truly gruesome. It’s very mid-century French existentialist—a stance familiar to me from literature courses I’ve taken, but not something that was part of Bobby’s education. “The point is that life has its beauties but it has its dark side. We need to be tough to survive, and not flinch from the truth. Even when it is our own deep loss.” Something was slightly off in his delivery, and  I got the idea that he needed to read the translation to someone—to tell them what life was like in the words of the song. So I asked one of our visitors to be a scene partner. “Ask Bobby what’s at the bottom of the Seine.” “Um…what’s at the bottom of the Seine…?” “At the bottom of the Seine, there is gold, there are tears, there are lovers who couldn’t go on living.” “Oh, my…!” “There are feet cut off by propellers, and grey monsters, and vomit, there are white fetuses no one ever loved…” he continued. “Oh god!” Her tanned face was going ashen. Bobby finished and I turned to him and started to say something about the where the objectivity needed to turn to emotion, when I realized that we needed to close the loop with his scene partner who was still standing there aghast. “Um, you understand that those were the lyrics to the song, right?” “Ohhhh…they were? Ohhhh. I get it now.”

But her innocence was exactly what Bobby needed. The song contains both coldness and warmth, a uniquely French combo of sensuality and precision. Bobby shocked our guest, and comforted her, and in the process he began to own the piece for himself. 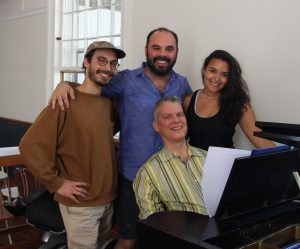