Unlike some coaches I’ve observed, I don’t tend to start my work by manipulating the surface of the music. Sure, I can be a maniac on the first day about language, because those kinds of errors do need to be nipped in the bud. They take days to repair. But I try not to pick away at musical minutia at the beginning. It just makes singers uptight and passive, waiting to be told what to do. Instead, I look for the basic expressive idea, the character, the style of each song. Who is singing? Why do they need to say this? Where are they? What are they not saying? What happens to them during the song? Every piece turns into a scene, often with a silent, internalized partner. We make up a mental movie, we find the genie in the bottle. I suppose it’s the Talmudic approach to song interpretation—questions, not answers.

But there does come a point where I need to climb down off my High Art Cloud and talk practicalities, and today was that point. Imagination ranks highest on my list, but sometimes singers want to know what sound to make, and how to make it. Two examples: Sam is singing Adam Guettel’s “Awaiting You,” which was written for Billy Porter. Sam is a lyric tenor who sings Mozart without a mic, while Billy sounds like Stevie Wonder on acid—a high, keening near-countertenor, usually amplified. Adam’s song ends with a high falsetto phrase that comes naturally to its first performer, but is tough for almost anyone else to do. Sam tried one thing and another—full voice, disembodied falsetto. Nothing really sounded right. I thought about it and said, “Sam, if you were in an opera rehearsal and you had to mark the high notes”—that’s what singers do when they want to take it easy on their voice—“what would you do?” “I dunno, something like this…” Whereupon he let out the sweetest, gentlest high Bb’s imaginable. Perfect. Easy. Singers have all kinds of sounds kicking around their bodies. Sometimes you just have to ask for them.

Bobby has the makings of a Verdi voice, and I did not want to start our work by squelching his sound. I imagined that he’d been told over and over again that art song had to be tiny and fragile (and he confirmed my suspicion during our session today). But cutting off the voice cuts off everything else too: expression, musicianship, freedom, passion. I resolved to get him to ease off the voice without shaming him about having such a prodigious amount of it. In the Saint-Saëns duet “Vénus,” which he sings with the lighter-voiced Sam, I simply said: “Boys, sing this piece TOGETHER.” Bobby knew what I was getting at, and made a sound I’d not heard from him before, the sweet timbre of a French horn played by a master. And voilà, the music flowed à la française. I could have sworn both boys had put on berets when I wasn’t looking. 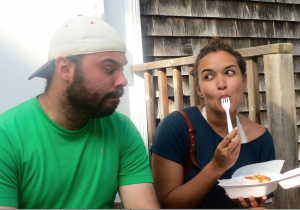 Mikaela had had her own aha-moment working on her Saint-Saens vocalise. At break time she rewarded herself with a piece of pie from our Brooklyn-based, chi-chi pastry/ice cream place called Four and Twenty Blackbirds. A cup of tea costs $4, a slice of pie $8. (Eye roll.) But she was running low on fuel and she had to deal with me for a few more hours, so pie seemed to be her only option. I got a tiny taste of it—apple/maple, and very good indeed—but Bobby gallantly passed. Not without regret, as you can see in the picture.