My NYFOS residencies are intense, but they’re also short—just a week long. We have a practical task in front of us: getting an intricate concert on its feet, memorized, staged as necessary, and absorbed artistically. But I also want to give something new to the very talented singers: an even higher level of expression, a sense of style in genres that may be new to them, a glimpse of my unconventional artistic process. It’s a delicate endeavor, kind of like musical laser-surgery or whipping up a soufflé. Every second counts, but the week also needs to feel warm and relaxed. To put it simply: I need to say the right thing at the right time. Don’t dump all the tapioca into the sauce at once. 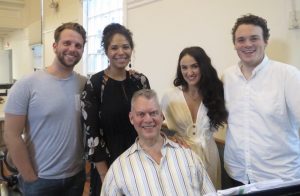 This cast had done very good preparatory work before they got here, and I’m grateful for that. The women are singing in Catalan for the first time and they have certainly put their time in on a tricky new language. Philippe is miles away from his usual repertoire—Rossini and Mozart and Britten—and is taking on a classic Tom Lehrer song that his audience will know by heart, but which is entirely new to him. As for Johnathan, well, he’s got it easy—he just did this program. So I’ve made him the ad hoc stage director, with the permission (maybe even gratitude?) of everyone else.

It’s been especially interesting working with Maria Lacey. She’s a student of my dear friend Amy Burton, and she seems to have acquired an impressive technical arsenal. Maria can do anything she likes with her voice. She’s petite, but she puts out an imposing sound up and down her range. High climaxes? Easy. Soft high notes? Duh, of course. Nebbishy mid-range lines that need strong projection? Bring ‘em on.  Five-hour rehearsal? She’s as fresh at 6 PM as she was at 1:30.

So what am I working on with this paragon? Well, I have a maxim, something I learned from a director friend named Ted Altschuler: when you’re onstage you have to say what you’re saying and do what you’re doing. This is harder than it sounds, and it benefits from a six-week rehearsal period. (And, I should add, it gets much harder six months into the run of a play.) I’ve been leaning on Maria not just to own what she’s saying, but make that ownership manifest to her listeners. It’s not enough to know your lyrics, or just feel them in your guts. You have to say them with passion. They have to become your own words—urgent ones.

I don’t like shortcuts, but there is a trick for this. Most people think that singing legato means singing long vowels and very short consonants: “Viiiiiiiiiiissiiiiiiiiii d’aaaaaaaaarteeeeeee…” as Tosca purrs in Act II. Sure, great for certain phrases, usually in opera where the vowel is king. But I think the better technique—at least for song—is to make the consonants slow and liquid. Squishy. Personal. Sexy. It transformed the way Maria sang Jonathan Dove’s “Between your sheets,” a love song from one woman to another. (I always like to have something explicitly Sapphic on my Orient shows, since our town has a long tradition as a hub for the lesbian community.) Maria’s first rendition was crisp and clean and a bit clinical, a committee report. The second, hot, a confession of hidden desire. Now she knows how to cast the spell. May she continue to do so for another 40 years or so. 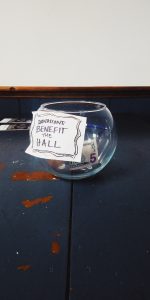 We had a visitation in the middle of the afternoon from three women, grandmotherly types full of kindness and curiosity. When we invited them to the concert they demurred, saying they wouldn’t be here on Sunday. “OK, then, we’ll serenade you now. Guys: the Rossini quartet for the ladies.” The cast piled into the a cappella first-act ender called “Toast pour le novel an” and pretty much nailed it. Our listeners were thrilled. “Oh, you have WONDERFUL voices! We wish you good luck! Thank you!” We discovered later that they located a fish bowl near the entry door with a sign that said “Contributions to Poquatuck Hall,” and they’d left us a $5 tip. No one had the heart to remove it.