After all that work and all my crazy anxiety, I am happy to report that the show went quite brilliantly on Thursday. The place was packed. The cast was on fire—seven vibrant personalities, set free in a way you don’t always see at my school. Mary Birnbaum’s staging (even the parts that had worried me) worked like a charm. And the song lyrics seemed to be clear—when I looked out into the house I saw that the audience did not have their heads buried in their programs. They were getting what they needed from the stage.

A huge victory: we finally seem to have conquered Juilliard’s Byzantine ticketing system, which used to put up a “Sold Out” sign while there were still hundreds of unused tickets floating around the school reserved for patrons, students, and staff. This time we were announced as sold out—and there were butts in all the seats. Kurt Weill really pulled his weight.

I am aware of two things above all when I am onstage: my relationship to the piano (always fraught) and the reaction of the public (as I perceive it). Each of these could fill a volume the size of the Manhattan phone directory, and neither is free of neurosis. Before I go onstage I usually have a little emergency. The issue the other night was the pedal, which was not allowing the dampers full clearance of the strings. “It sounds a little…tinny,” said Mary Birnbaum.

There were two problems, only one of them correctible: my metal pedal extender, a hand-made device that allows me easier access down there, was not properly attached. We fixed it, and things were better. Problem #2: the harp of the piano (the wood that holds the pedals) was a little low, which I hadn’t noticed so much on the previous days. With the extra four inches the extender adds…well, it’s elementary physics. Longer axis, shorter rotation. These tiny details are crucial: if my feet are working, my hands can release. But it’s a mental game as much as anything else. By the time I left the stage at half-hour, I was sure I had about 80% of my pedaling capacity. It was enough. The rest was psychological. I had to tell myself over and over again, “YOUR PEDAL IS FINE, GET OVER YOURSELF, PLAY YOUR SONGS.”

Then there’s the audience. In that theater I am at some distance from the lip of the stage. I can’t perceive the nuances of response and I can’t always hear laughter. But I can hear cheers, and there were a lot of them all night. A mix of students and middle-aged concert-goers is a peculiar blend. The older listeners clap politely, while the students holler when they like something. But I think the younger listeners energized the senior ones, and I could tell this concert was landing. Big time.

As I age, I am getting more overtly emotional. I almost lost it three times during the night: first when I was introducing the pacifist song “Der Graben,” then once again when Greg Feldmann passionately delivered the end of the song, and once again during the encore, Eisler and Brecht’s “Peace Song.” My hopes for a world in which these wonderful young singers can thrive overwhelmed me. So did my gratitude to each of them for performing with such clarity and skill and daring. I felt their vulnerability—or was it my own vulnerability that made me choke up? 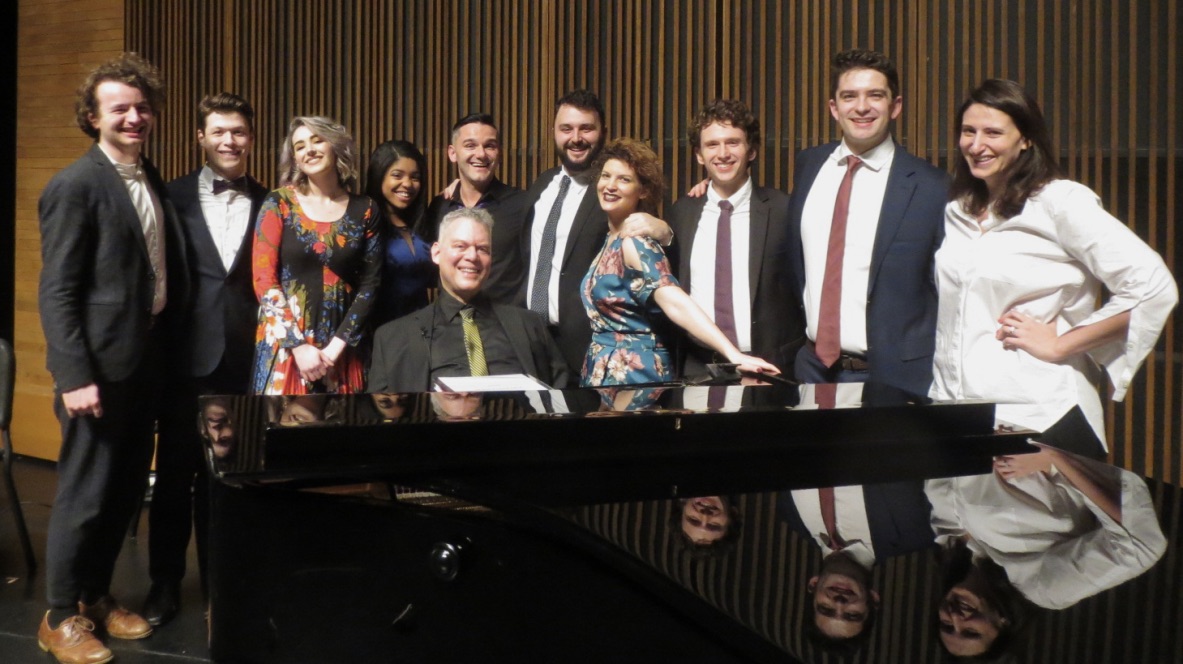